Home→Sport→The boys are back in town 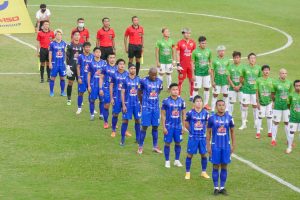 The boys are back in town; and enjoyed their tenth home win in fifteen matches at the Municipal Stadium (and briefly at the Leo stadium).

At this stage of the season, challenging for a place in the season-ending playoffs. points matter far more than style. Which is good news. As there was not much style on show in front of a crowd of 730.

Jaturong made only his second start in goal for Chiang Mai. Other changes saw starts for Chutipan, Atthawit, (with his latest hair style), Somroeng and Sumeth. Changes in personnel but a very familiar formation.

Lampang were a very different side from that which entertained and beat Chiang Mai in November 2020. Just two players remaining in the starting XI. Their main goal threat, Douglas Ferreira, joined Nongbua and was replaced by Todd Ferre on loan from Persipura in Indonesia.

Lampang’s recent form included four draws in the last five games – including draws away at Nongbua and Nakhon Pathom. Yet they arrived 14th in the table; probably safe but only just.

The early stages were largely controlled by Chang Mai. Bernardo’s header threatened from a first minute Bamba corner. Chiang Mai’s possession game was very familiar. Rebuilding from the back whenever necessary. The catch with playing the same way, and in the same formation, every game is that your opposition knows exactly what to expect.

A rare half chance for Lampang ended with a Surachai right foot volley dribbling into Jaturong’s grasp.

A series of half-chances for Chiang Mai saw Atthawit launch the ball over the crossbar; Chutipan unable to get a solid connection on Bamba’s free kick and Bamba himself clearing the crossbar from twenty yards.

A neat pass from Jeerachai set up Visit who skied his shot over the bar and Visit’s close range shot was then deflected wide by Narupon after a break down the right side and a low cross into the penalty area.

Some samba football from Bernardo created space and released Somroeng down the right flank. His cross evaded Nattachai but reached Ryo whose instinctive header was pawed away by Jirunpong.

Into injury time and the stalemate was broken by Bernardo running in front of Athatcha to meet Nattachai’s left wing cross. From six yards out his header was met with an equally good reaction save from Jirunpong; the ball rebounding off the goalkeeper where Bernardo falling forward somehow threw up his trailing right leg to deflect the ball back into the goal. A terrific instinctive finish. 1-0 Chiang Mai.

Lampang introduced Alex (briefly of Chiang Mai) and Somsak for the second half. But it was shortly after the restart that Chiang Mai doubled their lead with the simplest of goals. On the left side in the middle of the Lampang half Sumeth’s throw in found Nattachai in space almost 30 yards from goal. With only limited options he let fly with his right foot. The ball had some curl but more importantly bounced in front of, and skidded over, the dive of Jirunpong. The goalkeeper will know he should have done better. 2-0 Chiang Mai.

Jaturong was the busier goalkeeper over the next minutes; pushing clear a cross from a short corner, fortunately taken so quickly that there were no green shirts to pick up the partial clearance; making a fine diving catch to cut out a left side cross and saving from Arongkorn’s right foot drive at the near post.

Alex had two chances to drag Lampang back into the game; placing a volley wide of the far post and later volleying over the crossbar when a cross from Jeerachai evaded Narupon.

Ryo was substituted by Suchanon with fifteen minutes to play. He looked less than pleased; although that may have been due to injury rather than disappointment.

Apisit replaced Sumeth and looked lively and it was a foul on Apisit that led to Bamba’s free kick being well saved by the Lampang goalkeeper diving away to his right. The keeper also did well to dive to his left to turn away a low shot from Apisit in the final minutes.

Not a pretty win; but a good clean sheet, two good goals and three points in the race for playoff places.

The automatic promotion places are, barring a disaster, taken by Nongbua and Chiang Mai United.

The play off places see four teams separated by three points. Three of the teams in play-off places were promoted from League 3 last season. Nakhon Pathom are third and in a fine run of results. Khon Kaen United are in freefall and lost today at Phrae. Chainat are in seventh; three points back. Just four games to go.

Finally a short rant. There were almost as many security personnel as fans in the main stand. Stalking around the main stand to ensure masks were worn and adjacent seats not occupied. Security wearing black shirts; with military hair cuts and behaving with an overbearing zealousness is not the way to bring fans back to watch football. At least give them a club uniform and a smile. That would be some progress. 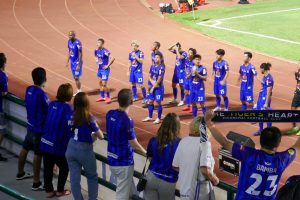