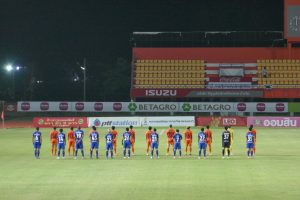 The main threat from Sisaket was from Babo and Evgeny Kabaev, who joined mid-season; both looked lively from the start.

In the second minute Sisaket showed their intent. A throw deep in their own half on the right side was headed on by Babo. Kabaev turned Narupon with ease and then left him trailing in his wake as he ran at pace into the Chiang Mai area. Under pressure from Meedech Kabaev’s shot was saved by Jaturon’s outstretched leg.

A minute late Sisaket scored. Meedech cut out a low cross from the right side; but then instead of clearing the ball he tried to play out of defense with a pass to Chutipan by the corner flag. Chutipan gave away possession. Kabaev found Babo by the penalty spot. Babo’s first touch took the ball away from Narupon before he buried his shot low inside Jaturon’s far post.

Kabaev could have added a second in the ninth minute when he turned from a throw-in and beat Samroeng, Meedech and Narupon before pulling a shot wide well inside the Chiang Mai penalty area.

A little life from Chiang Mai saw Apisit’s long range shot easily caught by Prin. It was a brief respite.

Sisaket continued to press forward, mostly down the right side, and Reungyou’s low cross from the goal line was well cut out by Jarupon.

Chiang Mai’s first corner came after 24 minutes. Taken by Bamba the ball fell on the half-volley to Bernardo at the far post. His goal-bound shot cannoned into the back of Nattachai, who had a very quiet game, and out for a goal kick. It was that kind of evening.

Chiang Mai’s style was familiar but desperately lacking in urgency.

Square ball, square ball, back pass, start again and rebuild. But it only works until it doesn’t. Chutipan again gave the ball away on the Sisaket right. Babo got to the goal line at pace and his low cross was met by a convergence of Jaturon, Meedech and Kabaev as Chiang Mai scrambled to clear the ball. Jaturon was hurt in the process while Sisaket loudly claimed a penalty for handball against Meedech.

Into first half injury time and Kabaev beats Narupon on the left of the penalty area; his low shot was well saved at the near post by Jaturon.

Half time and Chiang Mai were fortunate to be only a goal down. Fifteen minutes to make some changes and inject some urgency into the visitors.

Instead the same eleven dribbled onto the pitch to start the second half.

Kabaev won a free kick in a good position after a foul by Chutipan. The wall did enough.

Sisaket continued to press; once again Chiang Mai failed to clear from the back. Chutipan’s clearing header was into the danger area around the penalty spot; Babo outjumped Yuki Bamba; the ball bounced awkwardly for Narupon and his clearance was into his right arm. Penalty. There were few protests from Chiang Mai. Kabaev’s penalty was powerfully struck high to Jaturon’s left. 2-0. Sisaket.

Meedech then did well to clear Kabaev’s powerfully hit cross from the right.

Confusion in the Chiang Mai area almost conceded a third. A long free kick into the Chiang Mai area should have been dealt with by any one of Narupon, Tassanapong or Jaturon. Instead they all waited while Kabaev ran between the two defenders and reached the ball before Jaturon who knew little about the save that he made with his knees.

With twenty minutes to go Chiang Mai had their best moments of the match. On the edge of the Sisaket area a Bernardo back heel found substitute Somyot whose first time pass released Ryo. With only the goalkeeper to beat Ryo slid the ball wide of the far post from ten yards.

Somyot, who had replaced the hapless Chutipan, was making a difference and his pass again released Ryo on the edge of the penalty area. His left foot shot from twenty yards was straight at Prin in goal.

A Bernardo header had too little power to trouble the keeper. Prin then had to make his one real save of the match turning a Tassanapong free kick over the crossbar; the last real chance of the game which was played out with little incident over the last ten minutes.

A couple of positives; Meedech was a strong as ever and Jaturon made some good saves; he is a brave goalkeeper. 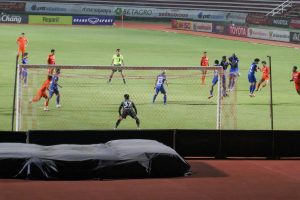 With Udon Thani beating Nakhon Pathom this was an important win for Sisaket and both teams moved closer to Lampang who are now in danger of falling into the bottom three. Udon Thani visit Chiang Mai on Wednesday.

At the top of the table – congratulations to Nongbua Pitchaya and Chiang Mai United; both teams were promoted to League One on Saturday.

The four play-off spots look to be between five teams; Nakhon Pathom, Khon Kaen United (who have lost their last five games) and Phrae all on 54 points; Chiang Mai on 52 and Chainat on 51. Phrae v Chainat on the last day of the season looks like it could be significant.

Chiang Mai’s home form should earn six points from the last three games and that ought to be enough for a play-off position. But injections of energy, creativity and commitment are sorely needed.

This was plodding, predictable, lethargic and very hard to watch.