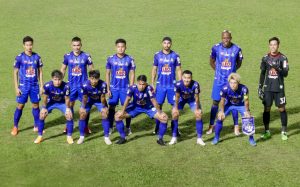 You were poor at Sisaket on Sunday.

But our home stadium has seen only one defeat in the previous fifteen games this season; sure two were played at the Leo stadium but, let’s be honest, that is more of a home to most of the squad than is Chiang Mai.

So in need of a win to stay in the play-off positions and up against one of the bottom three teams in the league what did you do?

Get together in the dressing room; show some anger; let off some steam. Then have serious discussion about the way forward for you as a squad and for the team.

Do not swan around on the pitch taking groupies with Udon Thani players.

But you did. And that sent a loud message that you have little pride in yourselves or your team.

You could of course still make the play-offs should Chiang Mai United do you a very big favour next week. But do you deserve to and do you want to?

The coach should go. Now. We could play the last two games with a random fan in charge. At least we would see someone that genuinely cares. Football is about passion. We have none.

So to the match.

Athibordee was back for his first start since 7 February – that should add some entertainment to the pre-match team picture. Nattapoom replaced the presumably injured Nattachai. Atthawit replaced Tassanpong in midfield. Jaturon continued in goal. Still no sign of the almost forgotten Sadney.

This was a very different Udon Thani side from that which beat Chiang Mai 2-0 on 12 December 2020. Only three players remain from that team; they rebuilt during the transfer window and became less dependent on SCG Muangthong. Thales joined from Uthai Thani; Arnold Suew from North Bangkok. Both were influential and Thales had a head or a foot in all three goals.

The defense is built around Montenegran defender Aleks Kapisoda and they were under pressure for much of the match ; the corner count was 10-2 in Chiang Mai’s favour; the shot count was 14-4. Sadly it is only goals scored that matter.

Chiang Mai looked lively at the start. Ryo narrowly beaten to Bernardo’s through ball by goalkeeper Kiadtisak and a Nattapoom cross from the left wing narrowly eluded Bernardo.

Tactically Chiang Mai were different as well; long balls were a regular feature of the first half, launched from defense by Meedech and Athibordee. The trouble with this approach is that it cut out the returning Atthawit who offers an inventiveness in midfield that has often been missed.

A fine covering challenge by Meedech to stop a Thales run on the right side resulted in a lengthy injury to the defender and may have contributed to the first goal minutes later.

Udon Thani won a thrown in on the left side parallel with the six yard box. Surasak lobbed the ball into the penalty area where Thales outjumped non-challenges from Meedech and Athibordee and flicked the ball onto to Prakit. Apisit Sorada was asleep or ball-watching as Prakit had plenty of space to dispatch a half volley passed Jaturong. 1-0 to Udon Thani.

That was the end of Udon Thani as an attacking unit for the first half. They sat back with everyone but Thales behind the ball trying to defend a 1-0 lead. A doomed approach.

Ryo’s shot lacked power and was straight at the goalkeeper.

A Meedech effort was very high and wide.

Even Athibordee was joining the attack; Ratchanon blocking his shot for another corner. Bamba’s corner reaching Bernardo who headed down towards the far post – Kiadtisak scrambling across goal to push the ball away with his right hand.

38 minutes gone and another long throw in from the left. This time from Meedech who has some real distance on his throw-ins. Like Tossapol of old. In the six yard box Bernardo and Nattapoom were already surrounded by three defenders. The goalkeeper came for the ball with neither conviction nor success. The throw cleared everyone and fell for Ryo, left unmarked in front of goal, who stuck out his right leg and deflected the ball into an empty goal.

A goal that was greeted by a bolt of lightening and a thunderclap that was almost as loud as Meedech’s strong tackle on Arnold Suew which launched a Chiang Mai counter-attack ending with a crossfield pass from Ryo and Apisit Sorada’s shot that was uncomfortably saved by Kiadtisak diving low to his left.

On the stroke of half time Bamba’s awkward bouncing volley was blocked by Kiadtisak and scrambled clear.

So 1-1 at half time and Chiang Mai had been much the better team but unable to convert that pressure into a lead.

The early minutes of the second half were untidy. Athibordee’s return was cut short after injuring himself in a clash with Thales.

Meedech, Somroeng and Ryo linked up on the right side with Meedech advancing to the six yard line where his angled shot was saved by the Udon Thani keeper – the first of a series of unconventional saves in the second half.

A similar near post save thwarted Bernardo. Then, in the sixty-fourth minute and thirty yards from goal Meedech pummelled goalwards beating four defenders before his right foot shot was blocked and his left foot could only send the rebound into the side-netting.

Meedech gets an honourable exemption from the above letter. He always gives 100% plus.

Udon Thani had slowed the game to near comatose. Substitutions were made with players almost crawling off the pitch. A point was enough for the visitors. They were about to be gifted all three.

Udon Thani’s second goal in the 76th minute was simple and effective. A long goal kick was headed on by Thales into the feet of Suew. With three defenders around him and over twenty yards from goal there looked like no danger. Pulling the ball away from goal and onto his left foot Suew drove it past the dive of Jaturong into the keeper’s bottom left corner. Even the German forward looked surprised at his success. It was a very well taken goal.

Ten minutes later Udon Thani added to their lead. A goal that started with maybe Chiang Mai’s best move of the match. Suchanon turned into space in his own half and released Pinyo wide right. His low pass into the area was met first time by Somyot and saved, again with his feet, by Kiadtisak.

The ball rebounded from Kiadtisak out of the penalty area to Arnont whose lovely pass off the outside of his right foot invited Thales to run on goal. Narupon could not make up enough ground and Thales calmly and clinically finished past Jaturon.

Even with four minutes of injury time that was game over. Ryo had time to launch a shot just wide of the near post and in a final flourish Kiadtisak was quickly off his line to block Bernardo’s shot as he ran onto a pass from Somyot.
Chiang Mai had lost at home for only the second time this season.

Playing with heart, Udon Thani took their chances. Chiang Mai did not. With Sisaket drawing at Phrae Udon Thani climbed out of the relegation places.

Nakhon Pathom, Chainat and Khon Kaen United all won. Chiang Mai fell out of the play off places for the first time since 19 December and are two points behind sixth placed Chainat with just two games remaining.

Next up – the local derby in remotest Doi Saket at newly promoted Chiang Mai United.