Home→Sport→Hanging on by a thread 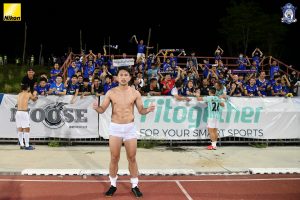 Chiang Mai FC were left hanging on to a playoff thread after a goal-less stalemate in Doi Saket on Sunday.

A game with so much at stake should have been something of a cup tie; yet it eventually fizzled out into a hot and bothered draw.

United needed a win to still have a chance of the Championship title. A Chiang Mai FC win would have been enough to reach the playoffs assuming that three points on Wednesday at home to Samut Sakhon is a given.

Instead if Phrae can avoid defeat at home to Chainat on Wednesday then Phrae and Chainat will join Khon Kaen United and Nakhon Pathom in the playoffs.

A Chainat win would see Phrae and Chiang Mai FC tied on points with Chiang Mai in the playoffs after home and away wins against Phrae this season.

Chiang Mai FC – giving fans hope by hanging on until the last game of the season.

The first surprise of the night was the absence of Ryo Matsumura from the Chiang Mai starting line-up. This appears to have been an outcome of his premature search for a new club. Somyot started in his place. Tassanapong replaced Atthawit in midfield. There was a welcome return to the substitutes’ bench for Sadney. Other injuries reduced the away team bench to just six players.

For Chiang Mai United De Leeuw and WG Jeong started up front with Paulista as one of the substitutes. 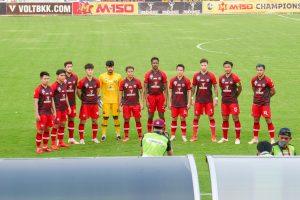 The match was sold out – 750 seats being 50% of this small ground’s capacity. The crowd on Evson Hill grew as the match progressed and was primarily blue. 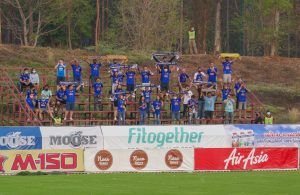 Local derbies anywhere in the world are a game apart from the rest of the League season. Form is less relevant that heart and pride. Nerves become an issue; first touches are heavier; mistakes matter that much more. The tribal rivalry is different from any other game.

Chutipan looked particularly wound up for this game. His short fuse was to prove costly.

Chiang Mai FC won the first corner in the second minute; the ball bouncing from Chutipan for a goal kick. Nont’s long clearance (and he does thump the ball) was flicked on by De Leeuw to Boworn and his pass into the area was just too far ahead of Jeong. As an attacking unit that was about all the home fans saw in the first half.

Thawin earned the first booking of the match with a head high raised foot against Meedech. Contact was fortunately minimal.

Fourteen minutes gone and Bernardo danced down the right wing and his fine right foot cross eluded both the defending Evson and Chiang Mai FC’s Somyot.

At the other end a Kittipat cross was headed wide by De Leeuw under pressure from Narupon.

United then struggled to clear a long Meedech throw-in; receiving the ball back on the right side Meedech lobbed the ball back into the penalty area where Bernardo outjumped Ronnapee and headed down towards the far post. Nont had the near post covered but had to throw himself across goal to shovel the ball away for another corner.

As Chiang Mai broke forward Chutipan was booked for a poor challenge hauling down Thanawich from behind.

Near the half hour Bernardo headed on an Apisit throw to Bamba whose first time pass released Somyot on the left side in acres of space. As he cut in on goal Somyot looked to beat Nont at his far post – but his shot was too close to the keeper who was able to parry the ball clear; perhaps fortunate that it did not fall to another Chiang Mai FC forward.

The simmering tension erupted like Mount Fagradalsfjall after 35 minutes. Tassanapong launched himself into a tackle on Boworn. It looked a poor tackle.

Within seconds Athibordee and an incensed Chutipan had piled in suggesting that Boworn had stamped on Tassanapong as he fell. Ronnapee inevitably joined the fray. Chutipan marched into Ronnapee squaring up to him – on another day in another sport that might be interesting.

Meedech hauled Chutipan away. But the defender had already been booked and a second yellow card was inevitable. As were his protests and his dismally slow exit from the pitch.

Ronnapee, Tassanapong and Boworn were all booked. Under pressure from both sides the referee seemed to get this right; eventually.

In what was basically a must win game for Chiang Mai FC and when they had enjoyed the best chances and most of the first half possession this was madness. The referee’s match report on Chutipan’s sending off need only say “for being an idiot.”

Into injury time at the end of the first half and Jaturon unconvincingly dealt with two right- side crosses. The second from Surawich saw De Leeuw win the ball before Jaturon dived into the forward for what would have been a foul by anyone other than a goalkeeper.

Half time; 0-0. Chiang Mai had enjoyed the better chances but were reduced to ten men.

Chiang Mai United dominated the second half; but Chiang Mai FC, who had moved to a back five, were resolute. Bernardo, on his own up front, was tireless. In the absence of Ryo he had to fetch a lot of ball – left wing; right wing and down the centre. The big man even got angry enough to be booked. His squaring up with Evson was good theatre

It was Chiang Mai United who nearly took the lead on 50 minutes. Sirisak released Thawin on the left. Jaturon could only claw at his cross palming the ball into the feet of De Leeuw on the six yard line. The forward’s instinctive return was goalbound until Jaturon’s redemption as he hurled himself to his left to turn the ball over the bar.

Paulista replaced Kittipat with thirty minutes to go. It did seem as though he wanted to decide the match on his own. He powered from the right side into the penalty area but under pressure from Meedech and Bamba his shot cleared the crossbar.

He then should have done better than head wide a lovely cross from De Leeuw. A give and go with Surawich on the left side resulted in a cross cleared under pressure by Athibordee.

With fifteen minutes left Ryo replaced Nattachai. He had little opportunity to influence the game. At this stage both sides had largely run out of ideas. And the heat was taking its toll.

Melvin was booked for dangerous play when his overhead kick caught more of Athibordee than the ball.

With five minutes to go two of the substitutes came together on the right; Porncha and Natthaphong. Natthaphong went to ground and his leg buckled under him. To their credit the players immediately knew that the injury was serious. This is also why there is an ambulance and medical team at every league match.
Carefully, and with time, Natthaphong was treated and placed on a stretcher for the ambulance to take him to hospital. It looked like a bad ankle injury though unclear whether it was broken.

One last chance for United in injury time as Paulista was brought down 22 yards from, and directly in front of, goal. De Leeuw’s free kick was into the wall. He lashed the rebound wide of the near post.

Game over. Chiang Mai FC had gamely held of with ten men for a hard fought point. They looked shattered at the end. A result that really did little for either side. Chiang Mai United cannot win the league title. Chiang Mai FC are hanging on for a play-off spot – their fate in the hands of Chainat.

After two grim performances against relegation strugglers Udon Thani and Sisaket this was at last a performance with heart. It may be too late. 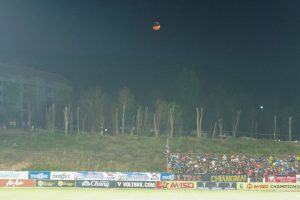