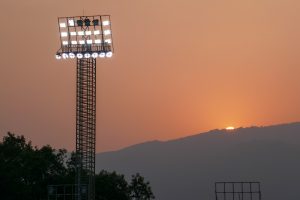 Back on 16 February 2020 Chiang Mai FC started their League 2 campaign with a 2-2 draw away at Samut Sakhon; Verdini nicking a 2-2 draw in injury time.

Who knew then that so much would change? Or that the season would not end until over 13 months later?

Chiang Mai still had the faintest hopes of a play-off spot based upon winning tonight and hoping Chainat won away at Phrae. Chainat did take the lead though Phrae went on to win 2-1 and seal their play-off place against Khon Kaen United. Chainat will play Nahkon Pathom in the other tie.

Poor old Samut Sakhon. Two wins and five draws in 34 games. They have just one point in 2021 from a home draw with now relegated Sisaket.

Samut Sakhon has been badly hit by Covid 19. The football team had to play their home games in Ayutthaya. There has been no money. The foreign players and coach have left long ago.

Players drove to away games on the morning of the match – there were no hotel stays.

It was not even clear if they had their own medical staff.

The club has been supported financially by Nuanphan Lamsam (Madame Pang) the Chairwoman of Port Football Club and former general manager of the Thailand women’s national football team.

They arrived with just four substitutes. It must be so hard to be motivated. Like knowing your being summonsed to see the headmaster every three or four days knowing that you are due another thrashing. At least in the days when that sort of thing happened!

Yet in front of a very low-key crowd they clung on gamely tonight. Putawat was excellent and brave in goal. Watcharapol deserves a decent contract at a better club next year. He worked hard and with pace and skill.

Yet never can a group of players have been more relieved when the final whistle came. They had earned a loud ovation from the crowd of 1.015.

The game was for the most part played in the Samut Sakhon half – it really was little more than a question of how many. And when.

The opening goal came after just four minutes. An Atthawit shot was blocked and Somyot was in space to roll in the rebound.

Putawat saved an Apisit half-volley. Bamba volleyed over the crossbar.

Putawat saved from Somyot. Then from Bamba; bravely diving after the rebound ahead of the onrushing Bernardo.

Putawat dived low to his left to save from Nattachai.

Meedech clipped the rebound onto an upright. It would not have counted. He was offside. Putawat did well, backpeddling to turn away a chip from Meedech on the left of the penalty area.

Nattachai shot over the crossbar and headed wide of the right hand upright.

It was almost painful to watch.

One bright spot for Samut Sakhon saw Watcharapol run fifty yards down the left flank, cut inside and launch his shot over the cross bar from twenty yards. It was an act of almost heroic defiance.

Half time; and Chiang Mai led by their solitary Somyot goal.

Ryo emerged for the second half in place of Bernardo. For a while he looked lively and interested. Until he was not.

Ryo set up Bamba for a shot straight at the keeper.

Porncha replaced Chutipan; send off last week and helped off this week with what looked like a thigh strain.

Somyot added his, and Chiang Mai’s, second in the fiftieth minute. Again set up by Ryo as he chipped his shot over the keeper into the top left corner.

Putawat was still busy. He saved from Somyot and then Bamba.

Shambolic defending allowed Porncha to reach the goal line; his cross rebounded of the thigh of the visitors’ centre half, Thanakon, onto the crossbar. Apisit was unable to turn in the rebound.

The from no where Samut Sakhon scored. Putawat belted a long clearance down the right side. It was chased down by Watcharapol who turned and found Thanakorn sprinting to the edge of the area; his right sidefoot shot slid underneath Korraphat, who was presumably as surprised as most of the crowd.

Briefly Samut Sakhon were having fun. Meedech was booked for a challenge on Sarawut. And Samut Sakhon came painfully close to an equalizer when Watcharapol’s low cross was met simultaneously by the diving Korraphat and Jirasak; the ball trickled wide of the far post.

The last twenty minutes were all Chiang Mai.

Atthawit’s powerful 20 yard shot was smartly turned over the crossbar by the beleaguered Putawat.

Nattachai in space headed against the crossbar. Ryo reacted well but directed his header passed the far post.

Kongnateechai, on as substitute for Atthawit, headed over the crossbar.

Putawat then dived to his left to turn away a trademark Ryo run and curling shot from 22 yards.

3-1 was inevitable as Samut Sakhon tired. Nattachai beating the onrushing keeper in the 83rd minute after Kongnateechai pulled the ball back to him on the penalty spot in front of goal.

It was simple win and a match that was hardly competitive.

But it was not enough. Just five points from the last seven away games and then a crushing home defeat against Udon Thani had effectively ended Chiang Mai’s season.

A statistical oddity for anyone that cares for such things; the two halves of Chiang Mai’s season are identical – played 17, won 8, drawn 5 and lost 4 for 28 points. Just double each number for the full season.

And three of the four playoff places have gone to teams promoted from last season’s League 3.

Ambition matters; we had far too little. 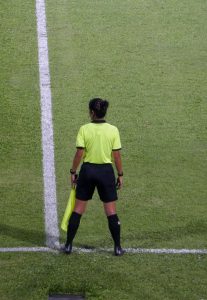 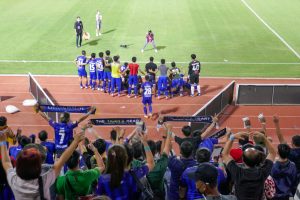 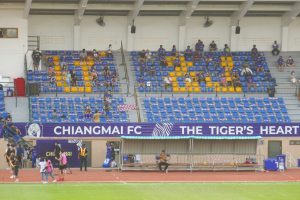