Home→news and views→The rise, fall and greed of Football Index 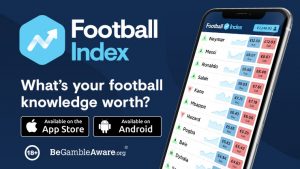 Football Index was a UK-licensed and regulated gambling product that allowed customers to gamble on both the future success of football players and the rules of the platform itself.

The keyword here is ‘gamble.’ The business was in theory regulated (although facilitated may be a more appropriate word) by the Gambling Commission – a government run body set up under the Gambling Act 2005 to regulate commercial gambling in Great Britain in partnership with licensing authorities.

After just five years Football Index risks becoming the biggest failure in UK gambling history. Reports suggest punters stand to lose up to £100m. Law firm Leigh Day is investigating whether there are grounds to take legal action against the platform on behalf of affected punters.

The platform allowed its users to buy what it described as “shares” in leading footballers, which would earn “dividends” over the three-year term of their bet. Users could also buy and sell “shares” between themselves, with Football Index charging a 2% transaction fee.

And that was the catch – Football Index dressed up betting as some form of genuine investment.

Football Index also sold itself as an investment product by partnering with Nasdaq in 2019 where the US tech exchange provided technology to the company. Nasdaq also posted an interview on its website with Football Index’s British founder Adam Cole.

Football Index’s logo and Cole’s face were also displayed on a digital billboard outside the seven-storey Nasdaq tower in New York’s Times Square, highlighting its push to provide tech to groups outside financial services.

Two years Football Index’s image of itself as a stock market for the sport lies shattered. Nasdaq trading technology was not the reason why Football Index collapsed but it was a poor choice of partner.

Football Index used the language of markets and investing to attract more than just Nasdaq. Addressing customers as “traders”, it told them they could earn “dividends” — and later compared its efforts with those of a central bank when it sought to reassure them about the effects of Covid.

In the Nasdaq interview, Cole said the company was “creating ‘recreational markets’ to sit alongside [the] ‘financial market’” to attract customers, who benefited from individual player performance instead of match outcomes.

And people bought into this.

Angry users said on social media that the Nasdaq name had given them confidence in Football Index. “It was the NASDAQ link that reassured me,” one customer wrote on Twitter. Another criticised the platform for describing itself as a stock market and mentioning Nasdaq “countless” times.

What Football Index had done was create a market out of assets that they did not own.

British members of parliament are calling for an inquiry into the collapse of Football Index, with leader of the House of Commons Jacob Rees-Mogg describing it as a “matter of concern”.  Among the proposals ministers are considering is banning betting companies from being shirt sponsors for teams, a source of income, but not even close to the importance of tv money, for clubs.

On the back of an extensive marketing campaign – which included pitchside adverts at Premier League matches, slots on TalkSport radio and, more recently, shirt sponsorship of Nottingham Forest and QPR – Football Index increased its user base to an estimated 500,000 account holders.

And that was the catch; punters deposited cash that would be held for three years. Football Index could only reimburse that cash if new punters subscribed. Hence the bonus to existing investors for every new punter they brought to the site.

Dividends were paid, calculated based on player performance on match days, and their presence in the platform’s Media Rankings.

Football Index styled itself as a ‘stock market’ describing itself as the sum of “Fantasy Football + Stock Markets + Betting”.

Mainly younger punters saw this as a way to invest in their football idols. To be closer to the game.

But Football Index had a bad habit of changing the rules while the game was in progress – for instance changes were announced in March 2021 including the issue of new Shares and the reduction of the “dividend” payout from a maximum of 33p per share to 6p per Share. This was the final warning sign of a business that was in terminal decline.

This reduced the value of all open bets, that were purchased at prices based on the higher payouts. This resulted in huge uproar from users who saw their portfolio valuation drop from 50% to 90%.

What the Gambling Commission failed to see is that this was effectively a Ponzi scheme. To pay out dividends Football Index required more customers to deposit money. It was an an unsustainable business model.

The Guardian has now revealed that the Gambling Commission was warned back in January 2020 that Football Index was “an exceptionally dangerous pyramid scheme under the guise of a ‘football stock market’” and that immediate and urgent action was needed “to alert and protect their users”.

The report stated that Football Index’s deliberate imitation of an investment product “has led to unparalleled levels of irresponsible gambling behaviour from 10,000s of users misled into believing they are investing rather than gambling, with little or no consideration that all of their money is at risk”.

Just think about that. The exploitation of greed. Misleading punters down the road that perceives an investment as something of lasting value.

The report estimated that Football Index’s liabilities “exceed £1million/month” back in January 2020 adding that “the only way the company can afford this long term is through the constant sale of yet more new shares to new users alongside a constant churn in positions”.

The report says this leaves Football Index “vulnerable [to] and destined for a bank run in which the first ‘X’ per cent of users manage to get some money out before the system collapses and the remainder lose everything”.

The report also argues that Football Index’s business model leads to “a dangerous false sense of security” among its users “over the money [they] have at stake on the platform, as the majority simply do not consider that they could potentially lose the entirety of it”. As a result, it suggests, there are “many individuals who have open bets valued at more than a year’s worth of their salary”.

And what did the Gambling Commission do?

The report adds: “Not only is this incredibly dangerous in that significant and life-altering sums of money are at stake and risk, but the perceived safety of the platform is inducing users to shift their capital from genuine investment vehicles (bank savings, ISAs, stocks) into it, given the hope and promise of constant high returns.”

Just wow. People who did not understand risk and return were investing life savings in something that had no underlying asset value.

The warning arrived at the Gambling Commission about eight months before the first in a series of crashes in the Football Index market, the most recent of which, after the company announced an 80% reduction in dividends, forced the site offline a few days later.

The Gambling Commission said it “suspended [the licence] on 11 March 2021 as that was the first point where we had sufficient evidence to demonstrate that suspension was necessary”.

The relationship between sport and betting is a difficult one. With so much of the business now moved online and into increasingly sophisticated instruments it is ever harder to monitor, let alone regulate the industry.

Simple solutions. Ban betting sponsorship from sport. And vastly improve the competence and reach of the Gambling Commission.