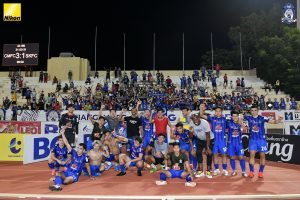 A long season that offered a chance of an immediate return to Thai League 1 ended with Chiang Mai FC failing to make the playoffs.

The play off places went to Khon Kaen United, Nakhon Pathom, Phrae and Chainat. Three of the play-off teams were promoted from League 3 at the start of the season. Ambition counts.

This is the final League table for a 14 month season! 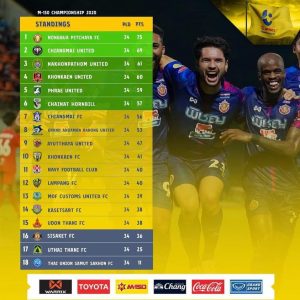 The second half of the season kicked off on 26 December. Covid then hit again and the Thai League shut down until the weekend of 6th/7th February with matches played behind closed doors.

To complete the season by 31 March (other then the play-offs) clubs had to play twice a week for the remainder of the season. A punishing schedule with some long travel especially for teams based outside Bangkok.

It was four weeks later on 3 March that fans were allowed to watch games in the stadia. There were just two Chiang Mai FC fans at Nongbua.

Most prominent of Chiang Mai’s mid-season recruits was Jhonathan Bernardo who moved from water-logged Ranong. Narupon Wild joined in early March to add to our defensive options.

Making his debut against Nakhon Pathom Bernardo netted after a fine international move involving Ryo and Sadney. Sadly the three of them playing at the same time was to be a rare sight.

With only one defeat at Chainat in the first nine games of the second half of the season CMFC looked well placed for the playoffs.

But the wheels came off in March with defeats at Nongbua (not a surprise), at Khon Kaen, at Sisaket and at home to Udon Thani. The latter was by some distance the worst, most insipid, most we-dont-care performance of the season.

A 10-man draw at Chiang Mai United in the penultimate game kept bragging rights even in the city but was not going to be enough to get Chiang Mai FC to the playoffs.

Then on 20 April the club announced that it was releasing thirteen players – basically the core group from last season with the happy exception of Meedech – a man for all seasons!

With the better players from the squad gone; and with no statement of intent or direction from the owners we will simply have to wait and see what next season brings.

Onto the second half of the season awards – in the circumstances these are a bit half-hearted but there were some terrific goals to enjoy.

Goal of the second half of the season.

And the winner has to be Ryo v Ayutthaya for the quality of the finish, the dramatic timing and the reaction of the CMFC players.

Yuki Bamba – faultless in a good away win at Kasetsart
Narupon Wild – on his debut in a 0-0 draw at Khon Kaen United
Korraphat – for two penalty saves in a 1-4 defeat at Nongbua.
Bernardo – in the 4-1 win against Customs – and still chasing down possession in end of the game injury time.

I will sit on the fence here – and declare all four equal winners! It is a team game after all.

Best away team performance at CMFC

An honorable mention for Udon Thani’s never give up 3-1 win.
But the winner is Samut Sakhon. They arrived without either a coach or a coach. If you see what I mean. With just four (including a goalkeeper) substitutes on a broiling evening.

Already relegated – thumped in every game since the restart. Their commitment put some of our pallid efforts to shame. Goalkeeper Putawat was as brave as he was fortunate.

Best CMFC player second half of the season

Bernardo – tireless even in pursuit of lost causes. Played like he cared.
Meedech – because he will always be on this list.
Ryo – but he fell out of favour with too many people. Maybe it was all too much Ryo and not enough CMFC. Or maybe he just needed to feel a sense of purpose around the club.
Yuki Bamba – always tidy. Always efficient. And scored at last.
Korraphat – missed crucial late games with injury. A shame as he enjoyed a good season and made penalty saving look easy.

There are not many to choose from in the second half of the season with 4 games played without a crowd. The contenders are:

Chiang Mai United. Great away support but it hardly counts as an away game.
Sisaket. Dismal view. Worse game. Used sanitary towel on the only entrance to the away zone – not classy.
Nongbua Pitchaya. The new stadium fails by some distance to live up to either the hype or the marketing pictures.

So the winner is : Uthai Thani. I am biased – I thoroughly like this little throwback-in-time town.

Managerial blunder of the half season.

Only one real choice – starting the game at Khon Kaen FC with neither Ryo nor Bernardo. In the nine games played after the February restart, before the KKFC game, the starting line-up had scored just once. A Bamba free kick. Out of fourteen goals scored.

Best prediction of the year – back in my February 2020 preview : Chiang Mai United – Prediction 2nd. And the two local derbies should be very lively affairs.

Dopiest prediction of the year – again in my February 2020 preview ; Sisaket FC – Sisaket FC will be the team to beat in 2020. Prediction. 1st. They were relegated.

The new season starts (in theory – but anything can happen in this Covid-blighted time – on 31 July 2021. I can’t wait.