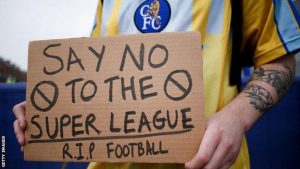 It has been a week since the launch and 48 hours later, collapse of the European Super League.

This was not the best or top six teams in the Premier League proposing a new League. This was the top six brands in English football. They would be the core of a European League, financed by JP Morgan, that was apart from UEFA.

It was planned as a breakaway competition to rival or replace the UEFA Champions League, Europe’s premier club football tournament organised by UEFA.

The founding clubs could never be relegated. They was also no mechanism for qualification from domestic leagues.

The clubs believed that they could continue in their domestic leagues; but what would be the point if other teams in say the Premiership could not qualify for the leading European competition.

Florentino Pérez, the President of Real Madrid, was appointed as the first chairman of the organisation. Plans for designating the competition’s first tournament began underway in hopes of commencing as early as August 2021.

For the owners this was ‘Netflix‘ for Football; it was ths clubs saying that they wanted to control their own broadcast rights separate from UEFA or broadcasters.

And an expectation of increasing each club’s value by at least 100%.

The rushed late-night announcement of the ESL received almost universal opposition from fans, players, managers, politicians, other clubs as well as FIFA, UEFA and national governments.

There is a lack of clarity on the UK Government’s position. Manchester United having met with No 10 before the announcement and believing they had the government’s support – before PM Johnson saw the public outcry and decided that he had better be on the bandwagon rather than run down by it.

Much of the criticism against the ESL focused on elitism and lack of competitiveness. Within 48 hours the uproar led to all six of the English clubs announcing their intention to withdraw.

The public and media outcry was remarkable – more passion than surrounded Brexit. Albeit much of it from the same people.

What was particularly strange was the outcry about the working class game being stolen by greed and corruption. Where have these people been for the last thirty years?

The attempt to create the ESL is not something that has happened overnight. It has been three years in development, which makes the spectacularly incompetent manner in which it was unveiled to a shocked footballing world even more remarkable.

For club owners the new competition would eliminate financial risk by operating on a closed league setup similar to US baseball and football. Gone is the risk of failing to qualify or being relegated. The clubs would have a stable source of revenue and in theory increased value.

Commentators noted that the ESL could render domestic competitions as irrelevant and lower tier compared to the Super League, and that it would destroy the ideas behind promotion and relegation systems.

Michael Cox argued in The Athletic that the European Super League would help restore completive balance in European Football due to the widening gap between big, rich clubs and smaller, poorer clubs in domestic leagues, and this inequality would only increase as time goes on without a Super League. He has a point. But only if the ESL clubs were banned from domestic competition.

The British Government announced its plans to commence a “fan-led review” into governance of English football, which Boris Johnson described as a “root and branch investigation”. The review also aims to examine potential changes to ownership models, like the 50+1 rule employed in Germany.

Now this is where nonsense starts to set in.

Forbes values Arsenal at US$2.8 billion. So if supporters are to own 50% of the club they have to find US$1.4billion plus to invest and then will have to finance any future losses and investment at the club.

It does give you an idea of just the scale of the investment required in this business.

It is hard to see why the government is suddenly getting involved – other than a populist bandwagon. A government that pursues a neo-liberalist agenda with every other industry is suddenly seeking socialist reform – but only in football. Anyone else see a vote-winner here.

Pep Guardiola, manager at super-rich Manchester City argued that “it is not a sport where the relation between effort and success does not exist…it is not a sport where success is already guaranteed or it doesn’t matter if you lose. I said many times, I want the best competition. It is not fair when one team fight, fight, fight at the top and cannot be qualified because it is just for a few teams.”

Just one example of the rampant hypocrisy of the last week. The very riches of Manchester City are themselves anti-competitive.

Lets have a quick peek at some Manchester City player salaries: 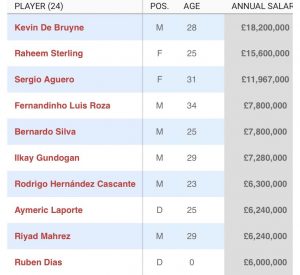 From behind the Sky Sports paywall former Manchester United and England defender Gary Neville reacted furiously to the news of the ESL.

Neville said it was time to “wrestle back power” from the clubs involved, saying they were being motivated by “pure greed”. Rather like Sky Sports and the Premier League.

“It’s pure greed, they’re impostors. The owners of Man United, Liverpool, Chelsea and Man City have nothing to do with football in this country. Manchester United, Arsenal, Tottenham aren’t even in the Champions League. Have they even got the right to be in there? They’re an absolute joke. Time has come now to have independent regulators to stop these clubs from having the power base. Enough is enough.”

As soon as foreign owners and foreign money were embraced by English football then all of these clubs would become businesses for their owners.

“Deduct them all points, put them at the bottom of the league, and take their money off them,” Neville said of the clubs linked to the breakaway league.

“Seriously, you have got to stamp on this. It’s a criminal act against football fans in this country.”

Once again; do stop, Gary.

The real criminal acts against English football fans are corporate boxes, betting sponsors, gbp50 plus tickets, and the need to have three separate tv subscriptions if you want to watch all the games played by your team.

Oliver Dowden, the secretary of state for digital, culture, media and sport, sat on the bandwagon and tweeted: “Football supporters are the heartbeat of our national sport and any major decisions made should have their backing. With many fans, we are concerned that this plan could create a closed shop at the very top of our national game.”

Poor old Oliver is still watching football in the 1960s. Today too may fans are either eating prawn sandwiches in the corporate box or are living in Asia.

The remaining 14 clubs in the Premiership came out with a variety of statements condemning the ESL. More likely behind closed doors the discussions were : How do we stop it; How do we change it; How do we become part of it?

Back to Manchester City – Ilkay Gündogan tweeted “With all the Super League stuff going on… can we please also speak about the new Champions League format? More and more and more games, is no one thinking about us players?
The new UCL format is just the lesser of the two evils in comparison to the Super League…”

He does not own the club. He does not speak for the fans. He is a highly paid employee. Player salaries, agents’ fees etc are the bulk of club costs and that requires billionaires to fund the game.

Players grandstanding about football losing its purity has been heads in the sand stuff. There is a correlation between their wages and owners’ need to protect their investments.

Some form of squad salary cap must be a good solution. A percentage of club turnover? Maybe on a sliding scale to protect the clubs with smaller capacity stadia. Something that can stop the ever-spiraling debt mountain that has been made so much worse by the pandemic.

The economic landscape of sport has in the last 30 years been shaped by broadcasters, greedy governing bodies and player salaries/fees etc. No mention here of fans.

SkySports, UEFA and FIFA are disingenuous hypocrites taking as much money out of football as they can. They are not there for the fans.

Maybe what this does at last is change the notion that UEFA can control the distribution of money to these clubs. The clubs want the money; they want to control the media rights; they want to use the leverage that they have.

How do we leverage more money when revenues have collapsed due to Covid and player salaries have continued to skyrocket? Fair question if you are an owner.

The six biggest brands in English football want more money. The ESL was leverage; a threat. Forget loyalty and decency – it is all about money.

The pre final word come from a tweet by Simon Jordan and a to-the-point video about Sky Sports.

The final word for now goes to John Barnes – who is never shy with an opinion!