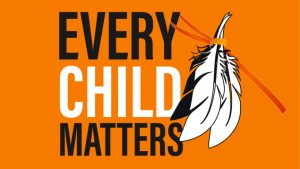 Multiple cities scrapped Canada Day celebrations on Thursday after the discovery of hundreds of remains of children in unmarked graves at former indigenous schools sparked a reckoning with the country’s colonial past.

In May almost 1,000 unmarked graves were found at former residential schools in British Columbia and Saskatchewan that were mainly run by the Catholic Church and funded by the government.

There have been additional discoveries since.

A #CancelCanadaDay march in Canada’s capital, Ottawa, turned into a sea of orange as thousands rallied wearing orange shirts to honor the victims and survivors of Canada’s residential school system. They carried a large banner that read, “No pride in genocide.”

The residential schools forcibly separated indigenous children from their families, in what the Truth and Reconciliation Commission in 2015 called “cultural genocide.”

Vigils and rallies were held across other parts of the country.

Canada has seen itself as a model for inclusiveness, equality, freedom and equal opportunity for all members of society. It’s history tells a different story.

Canada’s reputation for tolerance was built on its efforts, starting in the 1970s, to create a multicultural society. But data shows inequalities abound both for indigenous communities and among visible minorities.

In his Canada Day message, Trudeau said the discoveries of the remains of hundreds of children at former residential schools “have rightfully pressed us to reflect on our country’s historical failures,” and the injustices that still exist for indigenous peoples and many others in Canada.

“This Canada Day, let’s recommit to learning from and listening to each other so we can break down the barriers that divide us, rectify the injustices of our past, and build a more fair and equitable society for everyone.”

Yet indigenous people, who make up less than 5% of the population, face higher levels of poverty and violence and shorter life expectancies.

Meanwhile a number of Muslim women who wear hijabs have also been attacked in Alberta in recent weeks, while in Quebec a law banning public servants from wearing the hijab is facing legal challenges, and critics have called the measure a form of institutionalized racism.

The residential school system, which operated between 1831 and 1996, removed about 150,000 indigenous children from their families and brought them to Christian residential schools run on behalf of the federal government.

There were more than 130 schools spanned the country from coast-to-coast.

Among the system’s architects was Sir John A. Macdonald, Canada’s first prime minister, who explained the aim of the residential school system before the House of Commons in 1883:

“When the school is on the reserve, the child lives with its parents, who are savages,” he said, “and though he may learn to read and write, his habits and training and mode of thought are Indian.”

Snatched up in cattle carts and by bus, tens of thousands of indigenous children taken to Canadian residential schools run mostly by the Catholic Church lived a “paramilitary” lifestyle, waking early to pray, waiting rigidly in lines and enduring regular beatings, survivors said.

A Canadian Truth and Reconciliation Commission (TRC) set up to investigate the impact of the residential school system said in 2015 that children were malnourished, beaten and abused as part of a system that it called “cultural genocide.”

Ruth Roulette, 69, who grew up on the Long Plain First Nation reserve in Manitoba, recalls being initially excited to ride in a car for the first time when she and her siblings were taken to the Sandy Bay residential school near Lake Manitoba, Upon their arrival, Roulette and her sisters were separated from their brothers and taken to get their hair cut short.

Indigenous children had their long hair, which often had spiritual significance for them, cut upon arrival and were forbidden from speaking their native languages, according to the TRC. Students were given European names and, often, numbers and uniforms.

On her first day at school, Roulette said, a nun silently handed her a pencil and paper and, when she didn’t respond quickly enough, punched her in the face: “There was blood everywhere. I didn’t know what I did wrong. I just cried and cried, and then I had to clean up all the blood.”

Roulette said she and her friends tried to run away but were caught, beaten and fed carrots for a week – they were told that “people who run away are like rabbits.”

The schools focused on manual skills, teaching boys carpentry and other trades while girls were primed for domestic service. While the schools were touted as the only way for indigenous children to get a formal education, the students also worked, cleaning out manure or feeding animals.

Survivors recalled a regimented lifestyle in which they awoke at 5:30 a.m., attended chapel half an hour later and then began a long day of schoolwork and chores.

In 2008, the Canadian government formally apologized for the system. Last week, Prime Minister Justin Trudeau said the Catholic Church must take responsibility for its role in running many of the schools and provide records to help identify remains.

Pope Francis said on Sunday he was pained by the discovery of the remains but did not apologize. Vancouver Archbishop J. Michael Miller, in whose historical archdiocese the Kamloops residential school was located, said in a tweet last week that the Church was “unquestionably wrong” in implementing a policy that resulted in “devastation for children, families and communities.”

This is not old history – this has happened within our lifetimes. In the 1960s Solomon Wawatay was removed from his parents at the age of 6 and sent to a residential school in Amos, in northwestern Quebec.

There, at the age of 8, he said, he was raped by a priest in his 30s. “I was only a child. I kept it hidden because I didn’t want to be made fun of,” he told the New York Times. “He was never prosecuted or faced punishment.”

He also recalled an incident when another priest had forced him to scrub his knuckles until they bled, recalling that he had said, “Get that dirty color off your hand, you dirty Indian!” Mr. Wawatay said he was also beaten.

At the school, Mr. Wawatay said he and other Indigenous children weren’t allowed to speak their native Algonquin language. So they would sneak away to the forest to snare rabbits and speak Algonquin among themselves, away from the prying eyes of the priests.

What is clear is that the discovery of Indigenous children’s unmarked graves and the past year’s Black Lives Matter movement are opening people’s eyes to long-standing economic injustices. That brings hope that lessons have been learned, the past acknowledged and that the future is a true north, strong and free.

The oppression of Indigenous peoples in Canada goes back centuries, but systemic racial injustice persists to this day, where Indigenous people continue to struggle for self-determination, social justice and freedom. Canadians need to find unity through understanding and recognising the systemic oppression the nation’s indigenous people have suffered. Change must occur now and will require all Canadians to work together.