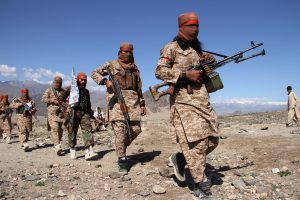 America’s war in Afghanistan is ending in crushing defeat.

The consequences of the conflict for Afghans, already catastrophic, are likely to get worse.

It was not just the US, but Nato allies, that made a shabby, half-hidden retreat in the last week abandoning a nation to mayhem, civil war and terror.

The USA, Britain and Nato have ended their military involvement, dating back to the invasion that followed the 2001 al-Qaida attacks on the USA.

When Biden announced the US withdrawal NATO allies had no option other than to do the same; but they did so with a shameful lack of protest.

Biden’s unilateral decision to quit, despite the absence of a peace deal or even a general ceasefire, is dangerously irresponsible. Nato, and UK leaders, were apparently advised rather than consulted.

The withdrawal has set Afghanistan back on the path to terror, mayhem and disintegration.

The former Afghan president and one-time US ally, Hamid Karzai, said: “Look at the scene. We are in shambles. The country is in conflict. There is immense suffering… Those who came here 20 years ago in the name of fighting extremism and terrorism not only failed to end it but, under their watch, extremism has flourished. That is what I call failure.”

At least half of rural Afghanistan is controlled or contested by Taliban insurgents. Regional capitals, even Kabul, may be next.

President Ashraf Ghani’s government looks on helplessly as its Nato-trained and equipped soldiers are repeatedly forced into flight or surrender. Faced with such incapacity, local armed militias are reforming. Majority non-Pashtun groups in the north are also threatening to revive their 1990s anti-Taliban struggle. With that comes the real threat of civil war.

For the Afghan people, the prospect of renewed anarchy is plainly terrifying. Limited recent gains – democratic governance, free expression and improved healthcare, education and civil and women’s rights – are all imperiled.

So, too, are the sacrifices of the tens of thousands of civilians and soldiers, Afghan and foreign, who died or saw their lives permanently scarred.

For western countries that imposed forcible regime change in Kabul, then promised to build a new nation of laws forged in their own image, this is a chastening moment.

For other nations looking to the USA for support this is also a chastening moment. Let’s start with Taiwan.

The Taliban are in complete control of about half the country and threaten to conquer the rest. The democratic, pro-Western government fostered by so much American blood and money is corrupt, widely reviled and in steady retreat.

In the fog of confusion, fear and blame that has now settled over government-controlled parts of Afghanistan, there is perhaps just one thing that the entire political spectrum can agree on: no one foresaw the scale or speed of the collapse of the Afghan security forces in recent weeks, even those who wanted a strategic retreat.

At the very least, the civil war is likely to intensify, as the Taliban press their advantage and the government fights for its life. Other countries—China, India, Iran, Russia and Pakistan—will seek to fill the vacuum left by America. Some will funnel money and weapons to friendly warlords. The result will be yet more bloodshed and destruction, in a country that has suffered constant warfare for more than 40 years. An entire country of almost 40m people has been left to its grisly fate.

It did not have to be this way. For the past six years fewer than 10,000 American troops, plus a similar number from other nato countries, have propped up the Afghan army enough to maintain the status quo. American casualties had dropped to almost nothing. The war, which used to rile voters, had become a political irrelevance in America. Since becoming president, Biden has focused, rightly, on the threats posed by China and Russia. But the American deployment in Afghanistan had grown so small that it did not really interfere with that. The new American administration views the long stalemate as proof that there is no point remaining in Afghanistan. But for the Afghans whom it protected from the Taliban, the stalemate was precious.

The withdrawal is a calamity for the people of Afghanistan. In 2001 many hoped that America might end their 20-year-old civil war and free them from a stifling, doctrinaire theocracy. For a time, it looked as though that might happen. But today the lives of ordinary Afghans are more insecure than ever: civilian casualties were almost 30% higher last year than in 2001, when the American deployment began, according to estimates from the un and academics. The economy is no bigger than it was a decade ago. And the mullahs are not only at the gates of Kabul; their assassins are inside, targeting Shias, secularists, women with important jobs—anyone who offends their blinkered worldview.

America was never going to solve all Afghanistan’s problems, but to leave the country back at square one is a failure – one which sends a message to the US’ enemies and allies.