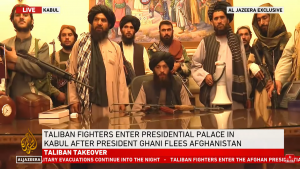 The US led the way. The UK and NATO allies had little option but to follow.

After twenty years of occupation the US led forces were leaving Afghanistan; and optimistically thinking that the country would remain open and safe with a well-equipped and US-trained army of 300,000 troops.

In little over a week those 300,000 capitulated with barely a shot in anger.

On Sunday 15th August Kabul fell to the Taliban. President Ghani and his government fled to Uzbekistan. The Taliban occupied the Presidential Palace (picture above.)

The Taliban are now the government – so far they appear to be on a goodwill mission; promising an orderly transition of power, protection of women, and becoming a responsible member of the international community.

But a transition that will be under sharia law and is likely to be far harsher than their early restraint. Promises are unlikely to match reality.

Pictures of helicopters lifting off from the US embassy recalled the humiliating fall of Saigon in 1975 — something President Joe Biden dismissed in early July as implausible and was by all accounts determined to avoid.

Videos from Kabul Airport recall the last flights evacuating Danang in 1975. It is a tragic sight and will never be forgiven by those trying to leave Kabul.


This is a failure of western foreign policy on a scale not seen for 50 years; and the longer-term fallout will profoundly change how many nations and people view western power.

This is a tragedy for the people of Afghanistan, and a betrayal of the thousands of US and allied troops — and more than 120,000 Afghans — who died in 20 years of war.

It was former president Donald Trump who announced US troops would leave by 2021 provided the Taliban met the terms of a peace accord signed last year.

The deal with the US was signed with Abdul Ghani Baradar, the Taliban leader freed from a Pakistani jail on the request of the US less than three years ago, who has emerged as an undisputed victor of the 20-year war.

During the Taliban’s 20-year exile, Baradar had the reputation of being a potent military leader and a subtle political operator. Western diplomats came to view him as on the wing of the Quetta Shura – the Taliban’s regrouped leadership in exile – that was most resistant to ISI control, and most amenable to political contacts with Kabul.

The Obama administration, however, was more fearful of his military expertise than it was hopeful about his supposedly moderate leanings. The CIA tracked him down to Karachi in 2010 and in February of that year persuaded ISI to arrest him.

In 2018, however, Washington’s attitude changed and Donald Trump’s Afghan envoy, Zalmay Khalilzad, asked the Pakistanis to release Baradar so he could lead negotiations in Qatar, based on the belief that he would settle for a power-sharing arrangement.

Baradar signed the Doha agreement with the US in February 2020, in what the Trump administration hailed as a breakthrough towards peace but which now appears a mere staging post towards total Taliban victory.

The power-sharing talks between the Taliban and the Kabul government of Ashraf Ghani stumbled along with little progress, and it is clear now that Baradar and the Taliban were playing for time, waiting for the Americans to leave and preparing a final offensive.

The Taliban were never really beaten. They merely did what guerrillas do in order to survive: they melted away in the face of overwhelming force, regrouped (in Pakistan), restored themselves to fighting strength, and returned to battle. Now they run the country.

On the US side going ahead with the pullout was Biden’s choice. The domestic political cost is still likely to be low. Americans are as weary today of the “forever wars” as they were under Trump.

But the scenes from Kabul today and the expansion of Taliban rule will haunt the rest of the Biden presidency. Mr. Biden remains in Camp David and CNN report that he will address the American public in the next few days. Not exactly in a hurry.

An option for the US would have been to retain much reduced US forces as a backstop to the Afghan military, just as the US retained a long-term presence in Germany and South Korea. A deterrent at least. Time to manage the transition and the withdrawal.

Instead, either the White House went ahead with the pullout regardless of intelligence warnings of what would follow, or the speed of the offensive was indeed unforeseen — a startling lack of insight in a country where America has had a ground presence for two decades.

Yet the Afghan collapse is also the failure in 20 years to have built a more functional state. The initial goal of the post-9/11 intervention was to prevent al-Qaeda from using the country as a base for further attacks.

Though President George W Bush invoked the Marshall Plan when pledging to reconstruct Afghanistan in 2002, and the US has now spent a trillion dollars on its campaign, it was never prepared to commit sufficient resources for the kind of nation-building it undertook after the second world war.

It did devote time and money to training and equipping the military. But Afghan forces’ strategy to contain the Taliban depended on US backing, especially air support.

Successive Afghan governments bear responsibility too through a combination of corruption and dysfunctional management.

The short term consequences are fear and uncertainty. A wave of refugees fleeing Afghanistan has already started and will continue.

The abandonment of Afghanistan raises doubts over the extent of the US commitment to its supposed allies. As one of the north Atlantic alliance’s biggest and most costly foreign policy priorities of this century implodes, those lessons will not be lost on Beijing who have already made peaceful overtures to the new Taliban government and who may, as will Russia, shortly recognise the new government.

How did it come to this: short summary from the Guardian.

Here is a quick recap of the events in Afghanistan from 2001 to last year. For a rundown of this year’s events see our story here.

President George W. Bush launches his “war on terror” in response to the 11 September attacks that killed around 3,000 people, with air strikes on Afghanistan on 7 October 2001. In power since 1996, the Taliban government is soon defeated and flees the Afghan capital Kabul on 6 December. Hamid Karzai is appointed to lead an interim government and NATO begins to deploy its International Security Assistance Force.

Afghanistan’s first election under a new system is held on 9 October, 2004 with an enthusiastic turnout of 70 percent. Karzai wins 55 percent of the vote. The Taliban regroup in the south and east, as well as across the border in Pakistan, and launch an insurgency.

As attacks multiply, the US command in 2008 asks for more troops and the first reinforcements are sent. Karzai is re-elected on August 20, 2009 in elections that are marred by massive fraud, low turnout and Taliban attacks.

On June 22, Obama announces the beginning of a troop withdrawal, with the departure by mid-2012 of 33,000 soldiers.

In June 2014, Ashraf Ghani is elected president but voting is marred by violence and a bitter dispute over claims of fraud.

In December, NATO ends its 13-year combat mission but a number of troops remain to train the Afghan military.

The following year, the Taliban make their greatest military advances since being ousted. The Islamic State jihadist group also becomes active in the region. Bloody attacks multiply, notably in Kabul

Ghani is declared victorious for a second term on February 18, 2020, an announcement rejected by his rival and former minister Abdullah Abdullah, who vows to form his own parallel government.

On February 29, the United States and the Taliban sign a historic deal in Doha under which all foreign forces would leave Afghanistan by May 2021, provided the insurgents start talks with Kabul and adhere to other security guarantees.