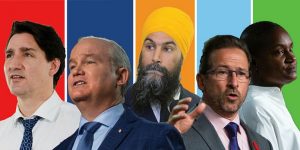 Trudeau called the election two years before it was necessary and in August polls suggested that Canadians were largely happy with the direction of the country and his Liberal government’s pandemic response; a Liberal majority seemed the most likely outcome.

Canadians neither wanted or needed a federal election. Polling day in September 20th. Half way through this short campaign national surveys suggest the Liberals have lost ground and are now in a statistical tie with the right-leaning Conservatives.

So far the Liberals have struggled to land attacks on their main opposition, the Conservatives, and their new leader Erin O’Toole, a former corporate lawyer and air force officer turned politician.

O’Toole has sought to broaden the party’s appeal and deflect potential concerns early by speaking about his support for LGBT rights and his pro-choice stance on abortion, and by courting unionised workers.

Meanwhile, national support is holding strong at about 20% for the left-wing New Democrats – another option for progressive voters – and the Bloc Quebecois, which only runs candidates in Quebec and is polling in second place behind the Liberals in the vote-rich battleground province.

And Canadians, who are rather more globally focused than their southern neighbours, have been watching a crisis unfold half a world away in Afghanistan, with Kabul falling to the Taliban the day the election was called.

Another coalition government is very possible replication 2019 when the Liberals won enough seats to form a minority government despite losing the popular vote to the Conservatives.

There’s also opportunity to turn things around as voters begin to pay closer attention to the campaign in its final weeks and with nationally televised party leader debates still to come when the leaders of the four main Canadian parties will face off in two televised debates this week.

Prime Minister Justin Trudeau, who leads the centre-left Liberals, the Conservative leader Erin O’Toole, Quebecois nationalist Yves-François Blanchet and leftwinger Jagmeet Singh will meet twice, debating in French on 8 September and in English the evening after.

O’Toole has sought to capitalise on anger at Trudeau for calling an election two years early, even as the pandemic is far from over. “Why did you trigger an election in the middle of a fourth wave?” he asked Trudeau last week.

The Conservatives have also gained confidence from a provincial election win in Nova Scotia days after the national election was called. The Progressive Conservatives, a regional ally of the national Conservative party, won power in the province for the first time since 2006, cementing the sense that the Liberals could be defeated with a well-run campaign.

The other two leaders remain relatively marginal. Singh’s left-wing critiques of Trudeau’s leadership have so far failed to translate into substantially higher poll ratings, although his New Democratic Party is currently polling higher than its 2019 result. Blanchet’s Bloc Québecois only fields candidates in Quebec, so its impact on the national parliament’s arithmetic is limited.

I suspect the outcome will be based upon better the devil you know – without giving Mr. Trudeau the majority that he wants – ie you can carry on but stop wasting our time. Preservation of the current status quo.