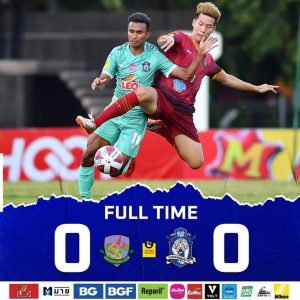 Football is meant to be fun. Even a good goal-less draw should have enough action to give your hapless reporter something to write about. But the Insi Chantharasathit Field pitch is anti-football; in golfing terms it is deep rough rather than fairway; that, and a 5pm start made for a grim game of football.

Chiang Mai made just one change from the side that won at Rajpracha last weekend with Pinyo replacing Meedech.

Kasetsart similarly made just one change with Weerawat replacing Supot.

That Kasetsart have scored just once in three games is a good clue about what to expect from the Bangkok-based team this season. They will bore their opponents into submission.

A brief distraction – up front for Kasetsart was the veteran Serbian, Nikola Komazec. This is a man who embodies the global game. In his long career he has played in Serbia, Slovenia, Bosnia, S. Korea, Norway, Georgia, Hong Kong, Egypt, Libya, Indonesia, Slovakia and Thailand. A genuine footballing nomad. He is unlikely to remember this gams but he must have stories to tell.

The limited first half action saw Jaturong catch and then punch clear two early crosses and Danilo get his head to Narupon’s long cross but without power.

Thirty minutes were gone before Klisana saw his first action; the Kasetsart goalkeeper nearly embarrassing himself as he back-peddled to unconvincingly push away Pongrawit’s long range free kick.

A long ball forward from Pongrawit for Tawan to run onto simply died in the long grass. The pitch was no help to Chiang Mai’s style of football.

Kasetsart’s best chance of the game came after 35 minutes when Komazec released Sukunchai on the right. Cutting inside Chaiyaphreuk he got a shot away, under pressure from Veljko, but straight at the well-positioned Jaturong.

Veljko, who was playing despite an eye infection, was replaced at half-time by Meedech with Narupon moving into the middle of the back three.

Chiang Mai’s first on target shot of the match came on the hour when Somyot’s thirty yard strike was comfortably saved by Klisana.

A series of substitutions only made the second half even more disjointed – and unfortunately longer. Porncha replaced Tawan and his twenty yard shot was also straight at the Kasetsart keeper.

Rafael replaced Sarawut and added some height and presence to the Kasetsart front line. Meedech and Narupon dealt, mostly comfortably, with the added threat.

And that was that. A point and a clean sheet on the road is a perfectly acceptable result. Just don’t make me sit through it again.