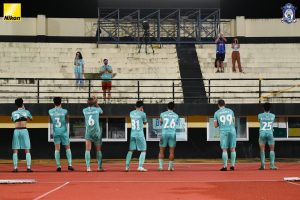 Injury and illness meant a completely new back three of Meedech, Watcharin and Chutipan, the latter two making their first starts of the season. Watcharin came to Chiang Mai from Sukhothai and made a confident debut, spoiled by conceding a careless penalty. Porncha replaced Pinyo on the right side of midfield.

Khon Kaen FC also made changes after three successive defeats. Possawee, Fillipe Veloso and, in goal Pattara, all making their first starts of the new season.

Fans are allowed at Khon Kaen in limited numbers and with proof of full Covid vaccinations. It is a tired looking stadium and with clubs in both Leagues 1 and 2 the city really does deserve better. It was also a lovely cool (by Thai standards) dry evening for football.

An open start to the game saw Khon Kaen threaten down the right side with a low cross from Ratthaphon and for the away team Tawan’s shot from a tight angle was parried by Theerawat.

Chiang Mai’s enterprising start was rewarded after 9 minutes when Supasak’s low cross from the goal line was only partially cleared by Kritsana as far as Danilo who side footed his low shot inside the right post from twelve yards to open the scoring. A neat finish passed a crowd of defenders.

Khon Kaen started to push forward. Bubalo’s pass for Chakrit whose shot beat Jaturong but was headed off the line by Watcharin.

Chutipan was relieved to only concede a free kick on the edge of the penalty area when he pulled down Ratthaphon.

Chutipan was again involved when he appeared to hold back Veloso running into the penalty area but the Brazilian’s dive was unnecessarily theatrical and the referee was unimpressed.

Into first half injury time and Danilo found space down the right wing; his pass inside for Tawan was hit first time and well saved low to his right by Theerawat.

For the most part Chiang Mai’s football was composed and the away team were good value for their half time lead.

The second half opening with Jaturong’s confident catch of a right wing cross.

At the other end Tawan ran into space on the right and his low cross from the right was met in space by Danilo; his header flashing wide of the left post.

Seiya Sugishita, making his Chiang Mai debut against his old club, came on for Tawan; he lasted just 6 minutes before limping off with what looked like a damaged hamstring.

Kabaev, returning from injury, replaced Danilo. He made little impact.

With just eleven minutes to go Chiang Mai conceded a penalty. Another pass backwards for the deep lying defense to clear. Watcharin wanted two touches and failed to see the substitute Winai bringing him down as he attempted to clear.

Fellipe Veloso calmly rolled the ball low to Jaturong’s right side to make it 1-1; it was no more than Khon Kaen’s possession deserved.

Tellingly Chiang Mai’s first corner of the second half did not come until the 85th minute and it was hoofed out of play over the goal line.

As Khon Kaen sort for an unlikely winner Meedech and Somyot were both booked; two late Khon Kaen corners and then one final scare for Chiang Mai when Pattara pulled his shot wide of the right post deep into injury time.

For Khon Kaen this was their first point of the season and they will be pleased with their effort. Chiang Mai will be disappointed not to have had their second away win. But it has been a lengthy road trip and with as series of injuries the team will be happy to return home and regroup.