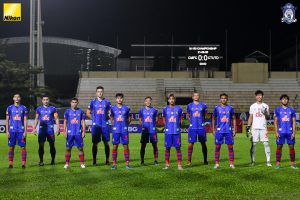 Chiang Mai’s first loss of the season was played out in truly dismal conditions better suited to Ark construction than constructive football.

There were four changes to the team that drew last weekend at Khon Kaen.

And now a confession. With a guest over for dinner who is the ultimate non-football fan (there really are such people!) it is fair to say that the match did not get my undivided attention. Though it was one of those nights when sitting at home with a glass of wine was preferable to being out in the deluge that bore down on Chiang Mai for much of the afternoon and evening.

Chiang Mai’s start was lively led by Tawan who shot wide of Saravut’s left upright in the second minute and then set up Danilo who rolled his sidefoot shot wide of the same post.

Jaturong was injured came in a near post collision after 27 minutes as he tried to gather Krailas’ inswinging freekick.
Porcha hit the far post running onto a Tawan pass inside the Customs penalty area; Porncha’s run was a fraction too early and he was flagged offside.

For Customs, Waruth’s header from a right wing cross bounced comfortably into the grasp of Jaturong.

Half time came; as did the very worst of the storm. Customs sought to replace Waruth with Skraparas. The game was then delayed while the fourth official was located to show the player numbers to the non-existent crowd.

By this time there were pools of water all over the pitch. Football was a lottery.

In the 48th minute Tawan’s run into the penalty area ended in a spectacular dive as goalkeeper Saravut came sliding out. The goalkeeper was slow off his line as he and Chatchon waited for the other to clear the ball. Tawan looked to get a toe to the ball before he was upended. The referee did not award the penalty – but also did not book Tawan for a dive. It really had to be one or the other.

At the other end Veljko tried to play out of defense on the left side. His short pass only got half way to Pongrawit; Krailas was first to the loose ball and his run ended as he was taken out by Chaiyapruek (who was booked) just outside the penalty area.

The resulting 54th minute free kick was costly. Krailas took the direct route from a narrow angle and sidefooted the ball past the two-man wall and slithering underneath Jaturong for a 1-0 lead for Customs.

The lead lasted for just five minutes. Porncha’s fine run down the right flank finished as he passed the ball into the penalty area for Tawan. The young forward confronted by Nuttawut still had a lot to do. Two touches to move the ball to his left and create space and then a 12 yard shot powered home for the equalizer. 1-1.

Tawan’s double back-flip celebration was impressive – in the conditions it was near miraculous.

Tempers briefly flared after Porncha kicked out at Kittiwut. Both were booked.

HoJu headed a free kick wide as Jaturong rushed from him goal, clattering into the Korean. The referee ignoring Customs appeals for a foul.

Elias then tormented Sumeth down the right side before getting his cross away which bounced in front of Jaturong who could only shovel the ball out in front of goal. Meedech was first to react and clear.

Then, 4 minutes into injury time the substitution of the season. Kevin replaced Krailas.

95 minutes gone. Chiang Mai gave away possession from their own free kick. Custom’s broke forward and Elias’ long range attempted shot turned into a measured crossfield pass for HoJu on the left of the penalty area. His clever chip towards the penalty spot was met first time by the lunging Kevin who tucked the ball past Jaturong’s left hand. 2-1 to Customs with the final whistle blowing seconds later.

With only two points from the last three games Chiang Mai are in danger of becoming a mid table team at this early stage of the season.