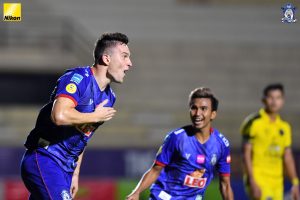 Second half goals from Veljko Filipovic and Tawan ensured a comfortable win, once again (and annoyingly) without fans, against a very limited Ayutthaya United side.

This was also a clash between two league one academy sides. We know about Chiang Mai’s BG loan players. But Ayutthaya fielded seven Muangthong academy players in a starting line-up had only two players, both of their foreigners, born before 1999.

Ayutthaya have had a difficult start to the season. Only two games have been played at home and they have now lost all five of their games on the road.

Their cause was made as good as hopeless when they lost their leading goal scorer, Felipe Wallace, to an injury after only 15 minutes.

Chiang Mai started brightly; Pongrawit chipped his free kick over the defense for Danilo to run onto – with Soponwit quickly off his line to make the block.

Pongrawit then hit the left upright with a terrific left-foot effort from 25 yards with the keeper well beaten. Strangely that was Pongrawit’s last contribution of note as his undoubted talent was hidden for the remainder of the game.

Supasak’s cross from the left was met by Danilo as he backed off his marker but his close range header only found the side netting.

Ayutthaya gradually settled down into their tidy passing game. Sarayut clipped a shot over the crossbar and Thatchapol pulled a long range shot wide.

At which point Ayutthaya lost both Wallace and any serious offensive threat. His replacement, Paroonrit could have made a glorious introduction but his right foot volley was screwed wide of the right hand post.

Jaturong’s first action was not until the 46th minute as he pushed clear a left side free kick.

Half time. 0-0. Chiang Mai were dominant but rarely threatening. It all felt a bit too friendly.

The second half continued much as the first had ended. Chiang Mai dominating possession. Ayutthaya conceding free kicks where Chiang Mai needed to take greater advantage of their height and strength.

Naruebet was booked for a foul on Porncha.

From the free kick Soponwit came a long way to challenge for the high ball against Filipovic. The keeper’s fists took out Filipovic rather than the ball. It was a strange ball for the keeper to want to claim and his hard fall onto his shoulder held up play for seven minutes.

Shaken, not stirred, the goalkeeper failed to make an easy catch minutes later and had to be bailed out by his defense.

Suchanon replaced Pinyo and his extra pace won a free kick 22 yards in front of goal as he was pulled down by Teerapat, who was booked. Tawan’s free kick was blocked by the wall but bounced up for Filipovic to head back across goal; Narupon challenged the goalkeeper and Danilo poked the bouncing ball over the line. Narupon was offside. No goal.

Then came the first goal in the 79th minute; Filipovic making a smart run to the near post before deftly heading Suchanon’s corner inside the far post. 1-0 Chiang Mai. Filipovic scoring against his old club with his first goal for his new club.

Saranyu was then sent off for a foul on Tawan. The incident was right in front of the fourth official and the team benches. It looked clumsy but there was no intent and little connection. Saranyu was incensed and took some time to leave the pitch.

With two minute of normal time left Jaturong punched clear a cross that looked easier to catch. Falling onto the foot of Thatchapol left the Chiang Mai goalkeeper needing his weekly injury treatment.

Seven minutes of injury time declared the fourth official – it should have been at least ten.

Tawan should have scored running into the six yard box and stretching for Suchanon’s cross; the ball running off his shin and wide of the far post.

Chaiyaphruek was booked and from a good position in the right side of the penalty area Ayutthaya hooked the cross high, wide and out of play. That was the extent of their threat. Awful.

Then, in the final minute of injury time, Tawan added a fine second. Soponwit tried to clear down the left side of the pitch but could only find Danilo who immediately passed the ball forward for Tawan who with his back to goal took two touches and turned to belt a left foot shot passed the stranded goalkeeper. 2-0 Chiang Mai.

It was a comfortable, and much needed, win against poor opposition. This week’s visit to the Ranong mudbath will be a very different game.