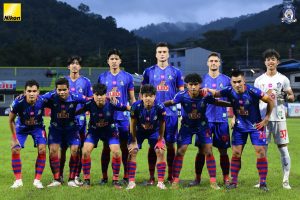 This was not football. This was Survivor Ranong. Fortunately both teams emerged from this 1-1 draw without, it appears, serious injury.

After last weekend’s 1-1 draw at Ranong the Sukhothai coach posted the following on social media:

“Welcome to the mud-wrestling stadium in Ranong. Another opportunity for the footballing world to make fun of Thailand….The questions is (sic) why the responsible organization (people) confirm that football is possible in such conditions. Force people to play on such a pitch is an act of negligent assault.”

Anyone who watched tonight’s footballing farce would side with Dennis Amato. The pitch is shocking; there are mud pools where players were sinking up to their shins. Fortunately the heavy rains dissipated for the second half.

So credit is due. The players were sensible; there were no reckless challenges; they provided a decent level of entertainment; and the referee was admirable; letting the game flow when he could and doing so with a smile. Just two yellow cards in those conditions was an achievement.

Chiang Mai made six changes from the weekend win against Ayutthaya. It may be that the coach asked for the eleven strongest swimmers; it may be that he also had an eye on the Sunday game against Lamphun after the very long haul back from Ranong. It did look like horse for courses; this one needing steeplechasers rather than flat race sprinters.

In Veljko Chiang Mai had the defender for these conditions. Big and strong – think Red Rum on a football pitch in (very) heavy going. After getting a faceful of mud and water in the second minute he scored almost immediately and barely put a foot wrong. Alongside him Watcharin and Chaiyapruek were both excellent. Nothing complicated. Nothing ambitious.

Ranong made two changes from their home draw with Sukhothai; Thawatchai and Muhamadasman making starts.

It was Veljko who gave the visitors the ideal, and rather unlikely start. Somyot chipped the ball forward towards the left wing; as the ball held up in the mud it fell neatly into Veljko’s stride on the left of the penalty area. The big defender was largely ignored by the Ranong defenders (there were seven in the penalty area plus the goalkeeper) and he had time to drag the ball inside Jomkao and with his right foot drill the ball low inside the far post from eighteen yards.

The tv commentators were convinced that the scorer was Kabaev; understandable given that Veljko was so far forward and the quality of the finish.

That may have been Chiang Mai’s only on-target shot of the game but it was a terrific start from a surprising source.

Ranong were to enjoy the majority of the first half possession but it was more about digging the ball out of the quagmire than it was about creating scoring opportunities.

GiSung Yeon floated a decent free kick over Jaturong’s crossbar from over 25 yards.

Damian then bullied his way to the goal-line on the right; his near post cross was headed on by Chamsuddeen and Muhamadasman, in space at the far post, could only head the ball into the arms of Jaturong.

Veljko was booked for a tackle on Carlos Damian who, to be honest, gives as good as he gets. Meedech’s fatherly arm was a calming influence.

Ten minutes to go to half time and GiSung Yeon volleyed a good chance over the bar from eight yards.

Into three minutes of injury time and Ranong won their first corner. From the left side it was hit by Chamsuddeen long to the back post. Thawatchai managed to get enough direction with an outstretched left leg to direct the ball back towards the edge of the area where Jennarong ran in unmarked to sidefoot the ball into Jaturong’s bottom left corner. The last kick of the first half. 1-1 at half time.

Jennarong was to try the same thing ten minutes into the second half running onto another partially cleared corner but this time his shot cleared the crossbar.

Thawatchai headed another corner high and wide and Saeid stretching for a lose ball from another corner could only poke his shot at Jaturong for a high catch.

Jaturong’s punch from a Jennarong cross was a little uncertain, not a surprise in the conditions, and he bravely dived after the loose ball at the same time as Chamsuddeen was trying to get a shot away; the Chiang Mai defense was quick to protect their injured goalkeeper.

A series of substitutions had little impact on the game. There was one last chance for Ranong as Damian did the hard work to beat Veljko and Meedech down the left to see his poor cross salvaged by Jennarong on the far side. Jennarong’s cross was much better finding Chamsuddeen in front of goal. His header had neither power nor direction.

Ranong remain unbeaten at home. They have played all five of their home matches in similar conditions; familiarity with those conditions; and the fact that the conditions are a lottery for visiting teams, must be a huge advantage and will likely see them in League 2 for another season; at which point the League has to (but probably will not) insist that something is done to improve the pitch.

Chiang Mai stuck to their game plan – they tried to keep the ball in the air or out wide where the bog at least allowed some opportunity to play and they defended with organization and intensity. The debutants performed well and there was an impressive sense of togetherness in this most distant corner of League 2.

Fans (to 25% capacity) will be allowed back into the Municipal Stadium on Sunday when the visitors are Lamphun Warriors, fresh from a big 3-0 home win over Chainat.