Home→Football→Tame Tigers no match for Warriors 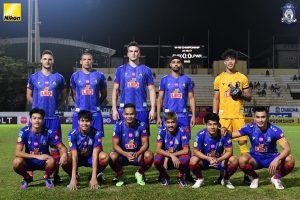 To try and give this shambles some perspective it is best to consider the fixture schedule.

In midweek Chiang Mai FC traveled by airplane to Bangkok and then by coach to the Ranong United mudbath; returning the same way after the match.

Meanwhile Lamphun Warriors had a home game on Wednesday and drove 30minutes up the road for last night’s match at Chiang Mai’s Municipal stadium.

So the players do have some excuse.

The club, however, does not. This was the first home game played this season with fans in the stadium.  But if you want fans to return to watch football in the stadium then welcome them back, treat them decently, and be honest. Last night’s crowd was just 472; and the majority were family, officials, VIPs and other assorted freebies.

Chiang Mai season tickets were issued for the same stands as last year. Except that last night every seat in the main stand was reserved for players, staff and VIPS. Season ticket holders were relegated to the concrete platforms at the far ends of the stand. “The seats are for VIPs. Covid” said a staff member, unhelpfully.

At most there were twenty so-called VIPs in the seats on the north side of the stand.

Add to that, no food or drinks were allowed into the stadium. By half time I was an unhealthy combination of angry, thirsty, hungry, bored, and numb.

Lamphun are playing in League 2 for the first time. Changes in ownership have brought in new funding and some eye-catching signings.

An early shot from Pongrawit was narrowly wide while Anuntachok, who was outstanding for Lamphun, broke into the Chiang Mai penalty area and saw his shot deflected over the crossbar.

To their credit Lamphun were the one team playing football. They moved the ball well on the ground with some crisp passing and movement. Chiang Mai’s main tactic appeared to be the long hoof forward from Veljko or a Meedech throw in.

Chonlawit, not for the last time, skied a shot over Jaturong’s goal; Arthit’s header from Tongchai’s cross nearly hit the corner flag.

But chances kept coming for Lamphun and they opened their account in the 37th minute. Anuntachok fell far too easily under pressure from Supasak near the right touchline. Arthit’s left foot free kick was bent in to the near post; Jaturong, probably straying too far from his goalline; could only parry the shot onto his left upright. Dae Hee Kwan reacted first to head the ball back across goal for João Paulo Sales to knee home from one yard.

Chiang Mai’s first attack with any real fluency ended with a delayed pass to the offside Kabaev.

Meedech picked up the first booking at the end of the half after Chonlawit appeared to run into him.

Briefly Chiang Mai looked the stronger side as they emerged for the second half. Pongrawit chipped the ball forward into the left channel; Dae Hee Kwan waited for the ball to bounce; it did; but over his head. Danilo from close range sliced the ball off the outside of his right foot for Kabaev ahead of Aly Cissokho to tap home at the far post. 1-1.

That was to be Chiang Mai’s last attack as Lamphun went on to dominate the second half.

Chonlawit should have hit the target but cleared the bar; a short reprieve as on the hour Lamphun were back in front; a fine move that started on the half way line and ended with Anuntachok turning inside Narupon and powering his right foot shot past Jaturong.

The extent of Chiang Mai’s problems were shown by the five minutes that it took to agree who the three substitutes would replace and to get the fourth official to show the correct information. Players left the pitch and had to rejoin while this mess was sorted out. Meanwhile Lamphun added their third.

Anuntachok and Ponlawat exchanged passes on the right. Supasak gave up defending and let Ponlawat run to the byline; his low cross evaded Jaturong and João Paulo was in front to Veljko to slide the ball home. Too easy.

Lamphun’s fourth after 90 minutes might have been the goal of the game if it did not appear that Chiang Mai had already given up. Ten yards inside the Chiang Mai half João Paulo chested the ball down for Arthit. Arthit then released João Paulo down the right side and continued his run; from the goal line João Paulo pulled the ball back for Arthit to slam the ball home from twelve yards.

Lamphun’s third successive win sees them in the playoff places with the first quarter of the season now complete.

For Chiang Mai next week’s home game with Chainat will reveal plenty about whether this team has any interest in competing for the top six places.