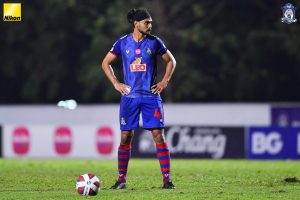 Chiang Mai slumped to their second successive home defeat on Sunday evening against Chainat. A starting line-up that was the result of absent and injured players was always second best in what was a poor game of football.

Only six players remained from last weekend’s home defeat by Lamphun. Pongrawit and Tawan are with the Thailand under-23 side in the frozen wastes of Mongolia.

Veljko after a training injury in the week was on the substitutes’ bench. Supasak and Suchanon were also both missing from the squad.

The game was played on a heavy pitch after the recent rains and behind closed doors. No fans were allowed after a small number of Covid cases are believed to have been traced to last weekend’s game at the stadium; this gives CMFC the distinction of being the first stadium to both re-open and close in this pandemic-impacted season.

Chainat made a slow start to the season with just one point in their first three games; their next seven games have produced sixteen points with just one loss on a bad night in Lamphun. They were unchanged from the side that beat Ranong last weekend; including their core group of interesting foreign players.

Two minutes into the game and Jaturong dived from his goal to try and gather a cross from the left side. His own defender, Watcharin, clattered into him leaving the young goalkeeper needing treatment for a head injury.

Elsewhere such an injury would have required a concussion check. Here it appeared to just need smelling salts. The young goalkeeper looked groggy but determined.

There was little immediate pressure on the Chiang Mai goal. The veteran, and man in tights, Douglas Cardozo shinned a left foot shot wide.

But with fifteen minutes gone Chainat took the lead. A free kick from the Chainat left was met by the big Trinidadian centre half, Daniel Cyrus, outjumping Narupon and Apisit to head home emphatically.

Cyrus has 87 caps for his country and came to Thailand from Erbil in Iraq. The global game!

On the half hour Chainat added their second; Badar Ali broke down the right side; his left foot cross looped in towards the far post where Patipanchai stole behind Apisit and Meedech; he had time to dig the ball out from under his feet and get away a left foot shot that squirmed underneath the ailing Jaturong.

The goalkeeper stayed down; he should almost have been given different treatment earlier. Five minutes later he had to be replaced; substitute keeper Supphachok making his first appearance from Chiang Mai.

Chainat were running the game at this stage and the only thing opening up was the Chiang Mai defense. Chainat were direct and played with pace through midfield. But they also became complacent.

Wellington and Bardar Ali were show-boating down the right side. They won a corner, eventually, which Douglas headed straight at the new keeper for his first save.

Somyot was lucky not to be booked for a studs up challenge; as Douglas pointed out to the referee it was not his first offense.

Into five minutes of first-half injury-time and Chiang Mai had their first shot; Natithon’s short pass setting up Kiadtisak; his long range shot was turned away by Sumethee diving to his right.

Welcome to Thai League football, Supphachok. He did will to get quickly from goal to block Wellington and then from a corner he was flattened by Douglas whose 39 year old jump may not be what it used to be as he jumped into the Chiang Mai goalkeeper.

There were chances at both ends as Danilo set up Somyot; his shot was straight at the Chainat keeper. At the other end Noppawit was so confused by the space he had in the Chiang Mai area that he also could only shoot at the goalkeeper.

Then, from nothing, Chiang Mai pulled a goal back. Sloppy defending left Kabaev free on the right to cross for Thanadon who, with great composure, hit a first time volley into the keeper’s bottom left corner. A very well taken goal although the goalkeeper should probably have done better.

Just for an unlikely few minutes Chiang Mai were back in the game; but with twenty minutes left Watcharin’s poor clearance fell for Noppawit to cross from the left side into the penalty area; where Douglas in fine style took the ball on his chest and then half-volleyed the ball inside the left post from eight yards.

A very tidy finish. Though tv viewers probably did not need to see the gleeful shirt removal and inevitable yellow card. 3-1 Chainat.

With fifteen minutes left Veljko eventually joined the game as did Amornthep.

There was time left for a few little cameos but no addition goals: Danilo dragged a low shot wide; Somyot was booked – not before time and his protests were less than plausible. Badar Ali made his 25th back heel; as was so often the case it just gave the ball back to the other side. Apichaok was booked for a poor tackle on Thanadon. The game finished with Narupon lining up a 25 yard free kick which he curled narrowly wide.

It was an uninspiring second half which was lit up by two excellently finished goals.

With not even one third of the season complete CMFC are 16 points behind the leaders and 9 points off second place. Four losses, a win and a draw in the last six games and Chiang Mai are dropping quickly down the table.

There are some difficult games coming up in November it is hard to see this current squad even as play-off contenders.

But at least some of the BG loanees are getting valuable playing time which is probably all BG need from our club.