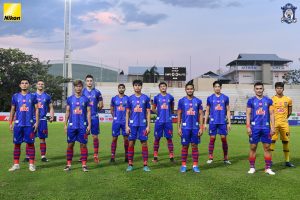 Awful. And not even as close as the score suggests. Loei from the NorthEast section of League 3 came to Chiang Mai and were thoroughly deserving winners against a Chiang Mai side that lacked energy, passion, quality and pride.

Chiang Mai will plead mitigating circumstances; that with so many injuries only four substitutes were available.

Narawit replaced Jaturong in goal after Jaturong’s head injury at the weekend. It is not a game that the substitute goalkeeper will remember fondly. Chaiyapruek returned for Natithorn.

Veljko returned after injury; replacing Danilo. This left Chiang Mai playing six centre backs, Narupon, Meedech and Chaiyapruek moving into midfield. Veljko, Apisit and Watcharin made up the back three.

Loei meanwhile have won five of their six matches in T3; they made five changes to their weekend team; leaving out their top goalscorer, Phakhawit, and giving the diminutive Ratchanasak a start in goal. In Tanapat (10) and Di Estefano (9) they also had the two outstanding players of the match.

The early intent was from Loei; Tanapat hit the right hand post with power from 20 yards after a lazy giveaway from Watcharin. Di Estefano, with less poise, was closer to the corner flag.

Yet it was Chiang Mai who could have opened the scoring when Thanadon ran onto a through ball and saw his first shot blocked by the Loei keeper; first to the rebound Thanadon’s left foot shot bounced down off the crossbar and ran across the goal line.

Comedy after ten minutes. Nutthikorn’s long range shot was defected narrowly wide for a corner; which was taken some two feet outside the corner marker; under no pressure Narawit drops the ball; then he slips while trying to recover and was bailed out by Kiadtiasak hoofing the ball off the line.

Fourteen minutes gone and Chiang Mai opened the scoring from their first corner. Veljko in front of goal, and bizarrely unmarked, kept his eyes on the ball and volleyed home Thanadon’s corner from eight yards into the bottom left corner.

It says a lot about Chiang Mai’s forwards that Veljko is now the joint leading scorer – he and Danilo have three each from eleven games.

Ten minutes later Loei were level; Di Estefano holding off a limp challenge from Watcharin and poking a low cross home in front of goal.

A touch of class came from Tanapat as he danced into the penalty area past non-challenges from Kiadtisak and Apisit before pulling his shot inches wide of the far post.

A speculative cross from Chaiyapruek drifted in on goal and had to be flicked over the cross bar by the stretching Ratchanasak. Chiang Mai’s second corner; and Chiang Mai’s second goal; Loei could not clear; Watcharin’s first shot was blocked; his follow up from six yards was rifled home.

Chiang Mai had taken advantage of some woeful set piece defending and led 2-1 at half-time.

The second half was to be dominated by the visitors.

It was some fifteen minutes before Chiang Mai made any progress into the Loei half; Kabaev combining with Thanadon whose shot (or cross) was saved by the keeper’s legs.

Veljko was booked for a must make tackle on Di Estefano. Sirawis took the free kick from 19 yards and another uncomfortable save as Narawit grabbed the ball at the second attempt.

Chanchai’s low cross from the right was met at the near post by Amporn; his close range flick was straight at Narawit.
Chaiyapruek was booked for a wild swipe at Amporn.

Tanapat’s drive narrowly cleared the crossbar. It was all Loei.

With thirteen minutes to go Loei got the goal their pressure deserved. Di Estefano had to back away from goal to stretch for an outswinging corner; his header was directed down at the center of the goal and squirmed through Narawit’s hands. The goalkeeper had to do better. But so did the defenders in front of him.

Apisit was lucky to avoid a second yellow card when holding back the big centre-forward who minutes later could have made the win look even better when his header from Tanapat’s cross whistled inches wide.

In Di Estefano and Tanapat Loei had confident forwards who were a constant threat. Chiang Mai’s two goals came from defenders at set pieces. It was the only threat shown by the home side.

Which begs the question – where does Chiang Mai FC go from here? We were outplayed by a League 3 team and on this form swapping places seems more than likely.