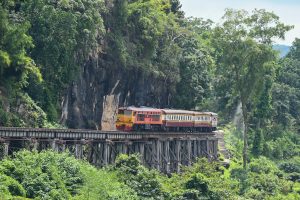 It was eight years since I last visited Kanchanaburi. Too long.

Instead of watching the 5pm kick off at Kanchanaburi Provincial Stadium I walked slowly through the Kanchanaburi War Cemetery opposite the railway station. Some 7,000 allied prisoners of war are buried there.

They were boys and men; officers and sappers; now side by side in a place so beautifully maintained that there is some dignity in death.

I was alone; except for two Thai girls sitting on the cross in the centre of the graveyard and merrily taking pictures of eachother.

I asked them how they felt – standing in this saddest of places. They had no idea why it mattered. There are parts of Thai history that are simply not taught.

Gunner JG Cozen’s memorial spoke for so many – “too dearly loved ever to be forgotten” – he was just 23 years old. 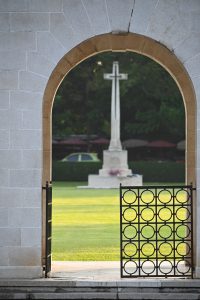 On 21 January 1942 Thailand was forced to sign a treaty of co-operation with Japan; it was that or invasion and occupation. Four days later Thailand was required to declare war on Britain and the USA.

As the Japanese embarked on the construction of their railway to Burma they used POW labour and contracted or conscripted labourers from Burma, Malaya and some from Singapore and Java. The death rate among the Asia labourers was appalling and is a story poorly documented and rarely told.

The PoWs were permitted by their captors to hold religious burials. They also, with some difficulty, maintained detailed records of the names of both the living and deceased.

In total over 250,000 people worked on the Thai-Burma railway; 39% would not survive. Beatings, malnutrition, disease, including cholera which spread along the railway in 1943.

We spent our second night in the tented resort at Hintok River Camp in Sai Yok. This resort is on the site of one of the many POW camps that opened along the rail line. 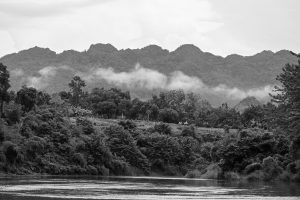 The camp has a small museum on the site of the former POW kitchen. It detailed the history of the camp and displayed pottery pieces excavated whilst looking for the POW graves.

A poem, by John Wisecup, an American POW, summed up the hell the prisoners endured:

No pest house from a bygone age
Could match its stench and squalor.
The jungle held us like a cage
And only death could follow.

Mosquitoes, lice and flies did vex
The starving, sick and dying.
This palsied lot of festering wrecks,
Soon failed . . . long past trying.

Cholera came and took its toll,
We dug the graves ‘til midnight.
That mighty railroad had to run
We toiled at night by torchlight.

The Hintok POWs were responsible for chiseling out the Konyu cutting; also known as Hellfire Pass and accessible from the Hellfire Pass Interpretive Centre and Memorial Walking Trail.

A day with temperatures in the mid-30s and with fierce rainstorms suggests just how awful conditions must have been – until I returned gratefully to my air-conditioned comfort and the dinner menu.

The full length of the rail line to Burma was closed down after the war. In 1957 State Railways of Thailand re-opened the line as far as Namtok. Three times a day in each direction passengers lean perilously from their 3rd class windows to take pictures from the wooden trellises of the Wang Pho viaduct. The river Khwae Noi below them on one side and a rock cliff face on the other.

But Kanchanaburi has been occupied before. The area that is now Kanchanaburi was inhabited for many centuries before the Ayutthaya Kingdom established their presence there.

The area that is now Kanchanaburi was inhabited for many centuries before the Ayutthaya Kingdom established their presence there.

During the First Millennium AD, the Mon Dvaravati culture established itself in the area, with their first major settlement being U Thong, about 70 km from modern Kanchanaburi, with other, smaller settlements nearer Kanchanaburi, such as at Phong Tuk and Muang Sing.

Around 1100 AD, Muang Sing was taken by the Khmer Empire, their empire spreading westwards from Angkor. At Muang Sing, about 30km from modern Kanchanaburi and 20km from Ancient Kanchanaburi, the Khmers erected a heavily fortified walled city along a strategic bend on the Khwae Noi River. This is considered the furthest west of known Khmer outposts.

The city was then abandoned until the reign of King Rama I (1782-1809) who used it as a part of the fortifications protecting the Kingdom from invasion from the West.

The grounds are immaculately maintained. Dark, green and lush. I do wonder what, if anything, we are building now, that will survive to be admired by visitors in 900 years’ time.

There are few places, maybe no other, where Thai and Western histories come together as they do in Kanchanaburi. It is a place to be grateful for the freedoms we enjoy. It is a place that records inhumanity and humanity; and that survival is what we do best.