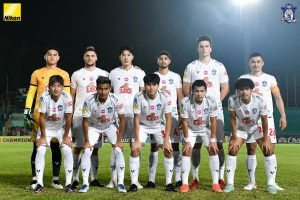 Lampang edged Chiang Mai FC 1-0 in the Highway 11 derby. In their first league game since 24th October the away team, recently impacted by an outbreak of Covid within the club, battled well for ninety minutes; but they can have no complaints about the result.

Chiang Mai gave a debut to Fahas in goal; the young keeper looks the part and is worth persisting with. Tawan and Pongrawit returned after their under-23 AFC trip to Mongolia.

It was the Lampang starting line-up that was the bigger surprise. There were debuts for Narongkorn and Nattaphon and a first full start for each of Thitiwat, Sillapasak, and Kidsada. Weerayut with six goals this season did not appear until the second half.

Lampang have only lost once this season, away at Udon Thani; their Pitchaya backed team includes players recruited from Nongbua and from Udon United; this win moved them to fourth place; two points behind second placed Sukhothai but with a game in hand.

Fahas was in action withing seconds; confidently making a good catch above the purple-rinsed head of Deyvison.

In a first half of few chances Warapong for Lampang and Tawan for Chiang Mai were both off target with free kick attempts. Pongrawit’s left-footed free-kick later in the half missed everything except a sound-effects microphone.

Narongkorn running into space from within his own half line eventually pulled his shot wide of Fahas’ goal.

On the half hour, Kabaev found space wide right; his mazy run, beating Natthaphon and Sillapasak, was followed by a hard low cross that somehow evaded Tawan in front on goal.

Warapong’s poor challenge on Chaiyapruek conceded a left-side free kick that was taken by Phosri and curled into the six yard box; Kidsada’s poor attempted clearance forced a late dive from the Lampang goalkeeper whose left hand pushed the ball inches away from the head of Veljko.

At the other end with half time looming Wichit linked up with Deyvison but dragged is left foot shot wide.

Lampang brought on Jakkrit and Weerayut for the second half and the difference was immediately apparent. Deyvison was no longer the only goal threat and Lampang’s football was more direct and less focused upon tidy possession.

Watcharin was booked for managing to get his leg on top of Deyvison’s head.

Fahas then made two saves; one textbook diving low to his left to keep out a long range effort from Weerayut; the second a reflex save from Weerayut’s close range flick from Poltawat’s cross.

The save of the game, however, came from Suchin Yen-Arom; Pongrawit’s trademark left footed curler looking bound for the top corner until Suchin clawed the ball away at full stretch.
In the 67 the minute Lampang took the lead. Weerayut curled an inswing cross in from the Lampang left. Deyvison and Tebnimit both got in front of their markers; Tebnimit getting enough of a touch to deflect the ball with one bounce beyond the static Fahas. Deyvison claimed the goal, as any good forward would but it was Tebnimit’s goal.

For Chiang Mai Danilo replaced Kabaev. Seiya replaced Watcharin. Seiya running into the left side of the penalty area coming close when his angled shot from Tawan’s pass clipped the outside of the near post.

That was about it; there was effort but no further attempts on goal. Lampang march on. Chiang Mai falls further down the table. Three points at bottom of the League Navy next weekend may not yet be critical but it would be a very welcome.