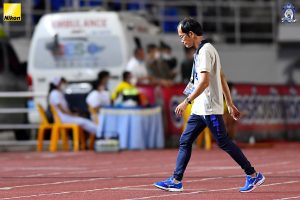 Unchanged from the team that lost at Lampang at the weekend Chiang Mai FC pilgrimaged across to Trat for a visit to the unbeaten M150 Championship leaders.

This was always likely to be a one sided affair – and it really only became competitive when it no longer mattered.

Trat have not been scoring goals with the freedom of their early season results and four 1-0 wins in their last six games suggest winning has become a battle rather than a stroll in the park. That was until tonight when the home side were three ahead on the hour.

The home side made one change to their weekend line up with Reungyos replacing Phornsak. Their three foreign strikers all started and each of them scored.

Trat spent almost the entire first half camped in the Chiang Mai half. But over-elaboration and some dismal final balls forward into the area allowed Chiang Mai to stay in touch.

In the third minute Valdo was first to a free kick from nearby the right corner flag and headed narrowly over.

At the other end Kabaev pounced on some poor defending and tried to release Tawan but, shadowed by Thanachartkun, the ball ran just in front of the Thai under-23 forward.

Babo’s first chance came as Conrado laid the ball back to the Ivory Coast forward whose first time shot was half stopped by Fahas; the ball squirming past the far post.

Conrado was saved from embarrassment as an offside flag negated his skied shot from twelve yards. He was not offside – but he does stay very tight on the defensive line.

On the half hour Trat took their inevitable lead. Pornpreecha, who was effective throughout the game, released Phituckchai down the left. Beating Meedech too easily he chipped the ball towards the far post. Fahas came and stopped and ended up stranded. Babo attacked the ball, Chaiyapruek did not, and it was powered into the back of the net from Babo’s head. Simple; effective and well-taken.

Leading 1-0 at half time the away side were outplayed yet still in the game. Seiya Sugishita replaced Tawan and his imagination and effort made a genuine difference up front.

Babo was also replaced by Trat at half time.

Chiang Mai’s early second half optimism came to a 51st minute halt. Pornpreecha’s long inswinging free kick from the right side was headed home unchallenged by Valdo as he evaded the attentions of Veljko and Chaiyapruek.

Worse came ten minutes later. Nirut’s low cross again from the right was carefully laid off by Valdo for Conrado to fire a left foot shot past Fahas. 3-0 Trat.

All over, surely? Both sides made multiple substitutions. Trat lost some momentum. And up stepped Seiya-san for an outrageous goal. Winning the ball just inside the centre circle he advanced a couple of paces and looked up; as the ball sat up he thumped the football equivalent of a high conversion attempt goalwards. Tossaporn, off his line, could not get his feet moving and the ball dropped softly behind the Trat goalkeeper into the net.

A very happy Seiya – and a rather embarrassed goalkeeper.

Six minutes of injury time saw no further drama. Trat had barely broken a sweat in a game that at times looked too much like a training match.

Meanwhile Chiang Mai’s fourth successive league defeat leaves the club too close to the relegation zone for comfort and makes Sunday’s visit to Navy a genuine sink or swim game!

Finally a tip of the hat to the young referee, Direk Kaort; just one booking in a sensibly refereed match which he appeared to enjoy and that always makes a difference.