Home→Football→Navy sunk by second half broadside 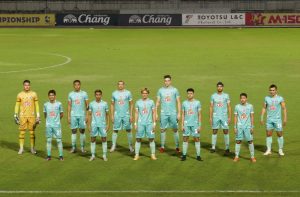 A strong second half performance from Chiang Mai ensured the club’s first win since 9 October and only the first away win since the second game of the season against Rajpracha.

With just five points from 15 games Navy look like a relegation certainty.

Goal less at half time it was likely that the opening goal would be decisive in a game that felt like a must win for both sides.

Chiang Mai made three changes from the side that lost at Trat in midweek. Chutipan replaced Watcharin; Danilo replaced Kabaev and Seiya Sugishita significantly made his first start of the season and went on to play all 90 minutes.

Veljko played on the right side of a back three, a role he seemed to enjoy, with Narupon in the centre and Chutipan on the left.

For Navy, Surat (21) and the diminutive Teerasak (22) replaced Panuwat and Jansada.

Navy made a lively start with two corners in the opening minute. Rosalvo then drew an early save from Fahas, who gave an assured performance in goal.

At the other end Tawan’s stooping header from a Meedech cross flew narrowly over the bar.

In the early stages Navy were creating the better chances; Tatsuya’s strong run ended with his shot well blocked by Narupon and Sirichai’s diagonal run from the right side led to a shot well saved by Fahas flying to his left.

Fahas was in action again to quickly pounce on a loose ball ahead of Jakrayut.

Breaking from defense Seiya’s low cross from the right side was met by a Danilo volley that flew narrowly wide of goalkeeper Surat’s left post.

It had been a lively and open first thirty minutes which inevitably slowed down as half-time approached.

Nimboon’s left foot shot curled into the arms of Fahas and at the other end Danilo was unable to create space in front of goal to finish a low cross from Tawan.

A scare for Chiang Mai seconds before half time as Sirichai headed against the left upright from Srisuk’s free kick lobbed from distance into the penalty area.

The second half started with Chutipan moving to the centre of the back three and Narupon to the left side. The aim being to reduce the Navy bombardment down that wing from Sirichai and Srisuk.

Five minutes into the second half Chiang Mai took the lead. In the penalty area with his back to goal Seiya held off three defenders before laying the ball back for Pongrawit who smashed a left foot drive past Surat’s right hand from 18 yards.

Soon after it was 2-0 when Veljko outjumped everyone to head home a corner directing his header low inside the far post.

Veljko was enjoying himself. His foraging run of fifty yards down the right wing looked unstoppable. From the by-line he pulled the ball back for Tawan whose first time shot was straight at Surat.

Nawaphon was booked for a poor block on Seiya making another direct run towards the penalty area.

Fahas was not a spectator – making a good diving catch to take out a left wing cross; saving at the near post from Teerasak and best of all leaping at full stretch to reach Goshi Okubo’s curling right foot shot.

Meanwhile Chiang Mai added a third with a flowing move down the right side; Meedech’s ball forward to Tawan was met with a first time cross that evaded Danilo at the near post but reached Seiya, ahead of Teerasak, for a far post tap in. 3-0 Chiang Mai.

Fahas’ deserved clean sheet was spoiled by a careless 77th minute penalty. Chutipan tried to play out of defense with a pass to Phosri on the eighteen yard line. Ponuwat reacted quicker to reach the ball first and was fouled by Phosri. Goshi’s penalty was low to Fahas’ right side. It was little consolation for Navy who were well beaten in the second half.

Fahas grows in confidence and gave an assured performance; his willingness to catch the ball rather than to punch has to be commended.
Seiya was excellent throughout. He showed strength and pace; no theatrics; and because he demands attention it frees up space for Chiang Mai’s other forwards.

Pongrawit’s left foot is all class. Though it does look like Tawan has lost some of his sharpness after his time with the Thailand under-23 AFC side. He is young. It will return.

Chiang Mai are back at Navy stadium on Wednesday for their League Cup game with Marines Eureka – before returning to Chiang Mai for League action against Nakhon Pathom on 28th November. This match will be at the 700th anniversary stadium. It is time to show the other Chiang Mai team who is the best supported club in the city.