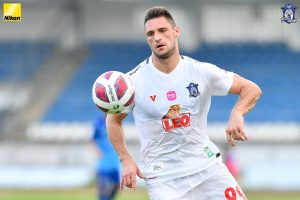 It is not unreasonable to expect a team called Marines playing in the Thai Navy stadium to at least look like they are fit, committed and willing to throw themselves into the line of fire.

This Marines side looked like a squad of schoolboys trying to avoid being called into action. They were woeful. But as a wise man said you can only beat what is in front of you.

Chiang Mai had only two starters, Meedech and Veljko, from the team that beat Navy FC at the same stadium on Sunday. This was an opportunity to give playing time to the remainder of the squad that has been on the road for four successive games.

Marines Eureka play in the Eastern Division of T3. They are bottom of the table; played 10, lost 8, 4 points. Their weekend match was a 6-0 defeat to league leaders Pattaya Dolphins United.

As a quick aside silver player numbers on a mottled sky blue shirt are a reporting nightmare. Chiang Mai’s red numbers on their white, third, kit are ideal.

As a second aside – a 3pm kick off in the coastal heat and humidity likely meant more suntan lotion than embrocation in the dressing room.

This was the Evgeny Kabaev show. Every time he had the ball the defense would part like a blue-shirted version of the Red Sea in a combination of admiration and trepidation. Kabaev in full flight is a sight to behold. He did not just score goals. Indeed in the first half he mainly created chances for his teammates – their profligacy in front of goal meant he would take charge later in the game.

7th minute. Kabaev on the left tees up Kiadtisak – he miscues wide.
14th minute. Kabaev bolts 50 yards down the left wing and cuts inside Worawut, whose defending was non -existent for 93 minutes. Kabaev’s shot was saved by Yaempracha.

16th minute. Yaempracha drops a soft cross from Amornthep. The referee penalizes Kabaev for trying to take advantage of the goalkeeper’s non-stick effort.

25th minute. Chiang Mai score. Meedech ambles crossfield to the left wing to launch one of his long throws. Veljko, who is head and shoulders taller than any of the Marines defense, rises unmarked to flick the ball into the far post. 1-0 CMFC.

Thanadon’s long range free kick was an easy save for the Marines keeper as the game amiably headed for half time.

Until in first half injury time Marines failed to clear their lines; the ball falling to Natithorn who set up Somyot for a 25 yard drive. Miscued badly the shot became a precision pass for Kabaev. A left foot touch to control the ball and a right foot shot past Yaempracha. A very relaxed 2-0 lead for the visitors at half time.

The second half opened with Chiang Mai pushing forward. Kabaev netted but was offside.

Then five minutes into the half the referee awarded Marines the softest of penalties. Chonlapat, the Marines captain, tripping inside the penalty area with Supasak and Meedech in attendance. Chonlapat took the penalty himself with a surprising nonchalance; low to Narawich’s right. 2-1.

Chiang Mai’s two goal lead was restored immediately; Kabaev running from the left side into the penalty area; his cross was met by a flick from Amornthep that was parried by the goalkeeper straight to Natithorn for a tap in. 3-1 Chiang Mai.

Marines brought on Puttipong for Wittawat. It was an inspired change. His first touch was to score. Meedech’s back header was wide of, and past, the stranded Narawich. The goalkeeper turned and pawed the ball off the line but only to give Puttipong a tap in. Awful defending. Although in reality Marines never looked likely to score without an assist from either the referee or the CMFC defense.

Veljko hit the crossbar from a corner.

Yaempracha made a sprawling save from Kabaev who seconds later blasted a left foot shot high over the bar.

It was Kabaev’s right foot that sealed the match. It was 4-2 when he ran between two defenders and finished from 12 yards. It was 5-2 when the Russian ran onto a pass from Kiadtisak and shot with power into the far corner. The nearest defender, Worawut, had basically given up by this stage.

Amornthep skewed wide from in front of goal. Suchanon shot narrowly over.

But Kabaev would show them how to finish. Out on the left once again he cut inside the hapless Worawut and eased the ball beyond Yaempracha. 6-2.

Yaempracha will feel better after the save of the game; a reflex response to Kabaev’s flick in front of goal after a Danilo (substitute for Somyot) cross.

Kabaev, the creator, danced down the left wing; crossed to Danilo at the far post; his unselfish header back across goal deserved better than Suchanon directing the ball wide of the keeper’s left post.

Into three minutes of injury time. Kabaev has the ball in the penalty area. Almost in slow motion he drags the ball onto his right foot as defenders fall around him and finishes calmly past the weary Yaempracha.

8-2 Chiang Mai. It had been the Kabaev show. He ran for 90 minutes; terrorizing the Marines defense every time he had the ball.

The question is does coach Pairoj start Kabaev on Sunday in the League against struggling Nakhon Pathom? He has to. Goals win matches and Kabaev’s right foot is currently a weapon!