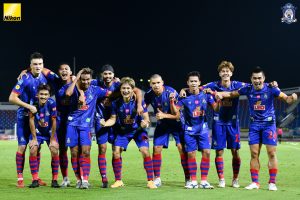 In front of a crowd of 956 a fine save and a fine header were the two moments of quality that earned Chiang Mai FC a home win on the club’s return, after 25 months, to the 700th Anniversary Stadium in Chiang Mai.

After his five goal haul in the midweek League Cup game at Marines Evgeny Kabaev returned in place of Danilo; the only change from last weekend’s away win at Navy.

Nakhon Pathom are a shadow of last season’s 3rd place play-off team. They were awful. Cumbersome, ponderous, aimless and goal-less.

Their last league match was a home defeat by Ranong. Blanco replaced Pongsathon and Sunchai replaced Krissana. Among their substitutes was one of last season’s CMFC castoffs – Kongnateechai.

The first half was 45 minutes of the most plodding football that you will never want to see again. Chiang Mai had two tactics; the long Meedech throw, which in fairness caused panic every time he launched the ball into the Nakhon Pathom penalty area, and secondly a 60 or 70 yard ball thumped forward by Veljko or Narupon, usually overhit, and only played after a series of square passes along the back line.

But at least Chiang Mai had a plan. Nakhon Pathom just looked lost and their one first half shot was from thirty yards and straight at Fahas.

Chiang Mai’s best first half chances came from the chaos around Meedech’s long throws. The second saw Kabaev’s turn and shot flatten Supoat, the big centre half. The third again reached Seiya at the far post where his close range shot was blocked by Nutchanon in goal.

Kongnateechai came on at half-time and his first touch saw a shot nearly hit the corner flag. For Chiang Mai Tawan was now pushing up on the left to form a front three with Seiya Sugishita moving to the centre.

There were two moments of quality in this half. The first, in the 47th minute, saw Sunchai play a give and go as he ran through a static defense into the Chiang Mai penalty area where Fahas was quick to leave his line and get down to his left to save.

Just after the hour came another long throw opportunity for Meedech from the left side. A scramble; a poor clearance from the goal line and the ball comes back to the Chiang Mai captain; his right foot chip into the penalty area was met by Seiya’s strong header beating Nutchanon diving to his left. The goalkeeper may think he should have done better.

It was Seiya’s third goal in the last three games since his return from injury.

Nakhon Pathom had half chances; Attapon’s shot hit the top of the crossbar and Neto tried to barge his way into the penalty area between Narupon and Chutipan; Neto tumbled to the ground; hearts stopped as the referee awarded a free kick on the edge of the penalty area; Neto’s freekick cannoned into the wall.

Fahas was almost embarrassed when he missed an attempted clearance from Meedech’s backpass; the ball dribbling goalwards as the goalkeeper turned to pounce on the ball before Neto could reach it.

Into the last few minutes and the game and the crowd briefly came to life. Meedech was substituted; maybe because his arms were tired. Seiya unselfishly set up Kiadtisak who cleared the crossbar as, at the other end, did Neto.