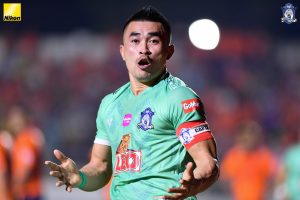 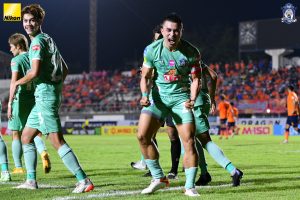 For all the money invested in a high profile line of Brazilian forwards it was a home town veteran who clinched this win for Muangkan against a determined, and unfortunate, Chiang Mai side.

Suchao Nuchnum was born in Sai Yok, Kanchanaburi. Before becoming a footballer Suchao was a Muay Thai boxer, his ring name is “Kobnoi Sor. Sakunpan.” The ex-Buriram midfielder played for Thailand between 2006 and 2009; this evening he came on as a second half substitute and his first time 82nd minute strike gave Fahas no chance.

Chiang Mai made four changes from the weekend team against Nakhon Pathom; with six games in eighteen days the rotation is necessary; Somyot, Suchanon, Danilo and Supasak all started this evening.

Muangkan too often looked like eleven individuals who had not yet been introduced. They are an expensively assembled team with plenty of League 1 experience; they are not a young side. But with that much talent their record this season is poor. Before tonight, just three wins this season and only Navy and Customs have conceded more goals.

Caion, Reis and Da Silva (Assa) are the Brazilian front line but they were well managed by excellent performances from Veljko, Narupon and Chutipan.

Chiang Mai were moving the ball quickly and Meedech’s early run down the right side and cross was scrambled clear for the away team’s first corner.

At the other end Da Silva’s left foot shot from a narrow angle hit the base of the near post with Reis blasting the rebound over the crossbar.
Narupon, made a fine covering challenge to stop Caion who minutes later threw himself to the ground holding his face in the penalty area when he could not get around Chutipan’ s strong defending. It was embarrassing.

Veljko’s excellent clearing header dealt with a Caion cross before Fahas got down quickly to cut out Rachanon’s low cross.

Five minutes before half time Prin made a fine double save; first keeping out Pongrawit’s long range free kick as it dipped and bounced near the left upright; Meedech was first to the rebound bringing another smart save from the goalkeeper.

Goal-less at half time. Muangkan’s front line had been running into dark alleys; often sideways or backwards; there was little movement, less passing and little pressure on Fahas.

The second half started in much the same way; Reis shot wide; Chitpanya tried to walk the ball into the net from the left of the penalty area through a wall of defenders.

But ten minutes into the half Muangkan got the piece of good fortune that opened up the game. Caion tried to pass the ball wide left to Da Silva. It was a poor pass; but it hit Meedech and bounced off the defender to Reis in front of goal; an instinctive left foot shot buried the ball wide to Fahas’ left side.

The momentum was with Muangkan. Thanachat headed a right wing cross back across goal for Da Silva whose close range shot was turned away at full stretch by Fahas.

But Muangkan’s fragile defense was always going to give Chiang Mai a chance; 65 minutes gone and Prin conceded an unnecessary corner.

Pongrawit took the corner; it was Prin versus Chiang Mai as the goalkeeper instinctively saved Veljko’s powerful header; he then got down quickly to his right to save Meedech’s header from the rebound; he bravely blocked Tawan’s follow-up but could do nothing more as Meedech gleefully knocked in the rebound. Terrific goalkeeping eventually beaten by terrific pressure from Chiang Mai.

Da Silva waving his arms in frustration was unlikely to inspire his teammates – and his close range chip to the far post was too high for Caion.

It was a game of fine margins. Pongrawit’s low drive was deflected for a corner; taken short the well -worked move saw Tawan head narrowly over.

Then at the other end Muangkan took the lead. Rattasak played a one-two with Da Silva and laid the ball back for Suchao whose left foot shot into Fahas’ top left corner was unstoppable.

A final chance for Chiang Mai saw Pongrawit beat the ground in frustration as his left foot shot curled inches wide of the far post.

With the resources available to them Muangkan really should be challenging for the play off places. But as a team they fail to be the sum of the individual parts.

Chiang Mai meanwhile head to Udon Thani on Sunday and back to Chiang Mai for the final game of the first half of the season, hopefully in front of a big crowd next Wednesday evening against Phrae.