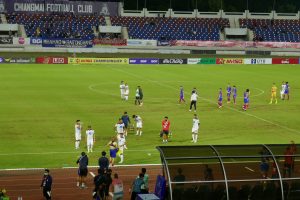 0-0 at half time. 1-1 after 83 minutes. With less than ten minutes to go Chiang Mai take off Gustavsson, their most likely goalscorer. The teams appear to have settled upon a sadly predictable draw. The owners are content.

Up steps Tawan. His 88th minute 25 yard free kick is hit with little power and is straight at Prapat, the Khon Kaen keeper; a simple head height catch. Inexplicably he drops it behind him before he can grab it.

The linesman; who cannot have had a much better view than many in the crowd, signals a goal. Chiang Mai fans all agreed that the ball had crossed the line. Khon Kaen players and officials were incensed. And neutrals would have no clue whether that was or was not a valid goal.

The goal stood and Chiang Mai played out time for a very welcome 2-1 win.

For Khon Kaen their only change from last week’s home defeat by Lamphun was Carlos Damian, newly acquired from Ranong, starting in place of Jakkrit.

The first twenty-five minutes were devoid of meaningful action; there was little pattern and less purpose.

The after 27 minutes Gustavsson ran from wide right on the half way line cutting into the edge of the Khoan Kaen penalty area; failing to find Seiya his pass rebounded to Pongrawit who hurried his shot wide.

Pongrawit threatened minutes later with a curling long range shot that was a comfortable save.
It was Khon Kaen’s turn to threaten as Kiadtiphon leaped to turn over Chakrit’s shot from the right angle of the penalty area.

Pattara then saw his 12 yard shot deflected over the crossbar as Chiang Mai struggled to clear the ball from defense.

It had been a strange first half; low on both interest and energy; rather like watching twenty rudderless ships on a boating pond it was all rather aimless.

Khon Kaen started the second half brighter; Pattara shot straight at the keeper as did Thanadol with a long range free kick.

Carlos Damian and Chakrit combined well allowing Chakrit to turn on the edge of the penalty area and shoot over the cross bar.

It was Chiang Mai’s turn to dominate. Pongrawit pulled his shot wide after a run down the left by Tawan.

The pressure would pay off.

Another Chiang Mai free kick down the left side. Sarawin’s free kick was met with power by Veljko. His header going across Prapat into the corner. 1-1.

Another left wing cross from Tanisman at the other end was met by a stooping header from Chakrit which was turned away by Kiatiphon at the near post.

Another powerful and direct run from Gustavsson deserved a more threatening final pass or shot.

The best move of the game was in the 79th minute with an interchange between Sumeth and Tawan setting up Amornthep (on as a substitute) who beat Phattharaphon with ease before rushing his attempt to clear the goalkeeper who was able to concede just the corner.

Somyot fouled Tiago just over 25 yards from goal. Chakrit’s well struck free kick cleared the wall and also evaded Kiadtiphon who appeared to slip in the increasingly worn goal area, and was unable to reach the shot to his right side. It was unfortunate for the young goalkeeper who had otherwise been immaculate.

The draw seemed likely until, in the last minute of normal time, Prapat dropped his clanger and Chiang Mai had their hard-earned three points; leaving the Khon Kaen management to harangue the referee over validity of the Chiang Mai winner.

The crowd was officially 915. The only conclusion is that whoever is providing this number is seeing double.