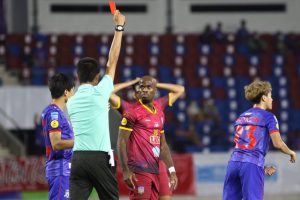 For ten minutes this was an open, entertaining football match. Then the referee became involved and it was game over for Kasetsart.

Patrick Gustavsson made his league debut for Chiang Mai, replacing Danilo up front. Jaturong continued in goal after his League Cup start in midweek.

There are many new faces at Kasetsart; significantly the two French forwards, Houla and Dia, were making their Kasetsart league debuts. Houla impressed for Nongbua against CMFC last season.
In the opening minutes Dia turned smartly in the penalty area releasing Sakunchai; his low 12 yard shot was well gathered to his left by Jaturong.

The goalkeeper’s quick release reached Supasak whose ball forward into space behind the defense set up a race between the onrushing goalkeeper and Patrik Gustavsson; the forward reached the ball first taking one touch into the penalty area followed by a very composed left foot finish into the empty net. Welcome to Chiang Mai, Patrik.

Kasetart countered quickly. Marut’s crossfield pass from the left was headed by Dia into the centre of the penalty area. Greg Houla raced Narupon into the area; they came together; Houla fell; and in the scramble that followed Jaturong gathered the ball as Houla was held off by Chaiyaphruek,

Maybe the referee, from his angle, thought there was a kick from Houla on the goalkeeper. It does not appear to have been for dissent. Houla was given a straight red card and after ten minutes Kasetsart had lost their star forward. It looked a head-shakingly poor decision.

Two minutes later Gustavsson’s pace took him down the left wing; his low cross into the area was bundled into the net by Seiya. There was no offside flag. Seiya beat Korrokot in the Kasetsart goal to the ball. The referee disallowed the goal perhaps thinking that Seiya kicked the ball out of the goalkeeper’s hands – except he never had the ball in his hands. Was he trying to make amends for the sending off? Seiya’s bemused “why?” said everything.

Ten men Kasetsart still pressed forward with Celio Santos leading down the left wing. His low cross evaded Chaiyapruek and Marut in space in front of goal could only hook the ball wide.

At the other end Pongrawit’s 25 yard strike had power but was straight at Korrakot. A Seiya cross from the left narrowly evaded Gustavsson.

1-0 to the home side at half time. And it was a surprise that Kasetsart, with ten men, were not further behind. CMFC failing to take greater control of the match.

The second half opened with two good chances for Chiang Mai to add to their lead. Veljko galloped at the Kasetsart defense. His measured pass was perfect for Tawan to run onto into the neatly area, chased by Arnont. With just the goalkeeper to beat Tawan is ready to strike when he falls under Arnont’s kick on his standing leg. No penalty said the still remorseful referee.

A Gustavsson run and cross was met by Tawan at the near post but the ball was scooped over the crossbar.

Kasetsart then enjoyed their best spell of the game. Marut spun and shot on the edge of the penalty area. Arnont’s ugly far post volley from Sakuncha’s cross was well wide. Another Marut shot from Dia’s lay-off was skewed wide. And Dia ran out of idea after a strong run into the Chiang Mai penalty area.

This left Chiang Mai playing on the break but Gustavsson and Seiya need more time together to build an understanding as their movement, or lack of, was causing confusion.

Gustavsson became the playmaker in the 69th minute as his short reverse pass released Tawan, holding off Woraphot’s challenge, to carry the ball to the byline and pull it back for Seiya to slam into the roof of the net. 2-0.

There were a flurry of late substitutions but little other activity in the remaining minutes.

A comfortable win for Chiang Mai; in no small part thanks to the referee. Jaturong in the Chiang Mai goal really did not have a save to make. Gustavsson had a memorable League debut. There will be tougher tests ahead.

Chiang Mai move into the top half of T2 and now, with the next two games against Khon Kaen FC and Customs Ladkrabang United a play-off spot becomes tantalizing close.