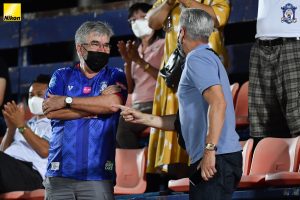 “How could you insist that I come and watch this….”

On 10 March 1984 two football fans joined the big crowd at St. Andrews in Birmingham for the FA Cup quarter final between Birmingham City and Watford.

Almost 38 years later those two fans met for the first time to watch Customs Ladkrabang United and Chiang Mai FC play out the dullest of scoreless draws in front of a crowd of just 215 fans.

38 years ago the game was set alight by a magical opening goal from John Barnes. There was no magic tonight. This was a plodding draw of near depressing mediocrity played out by two teams lacking both ambition and quality.

Once you have navigated the abysmal Saturday night traffic to get to Customs it is a quaint little ground. There is no running track. The crowd was somnolent; every word on the pitch was audible. It felt like Kent League Herne Bay in mid-season but 25C warmer.

Chiang Mai made three changes from the side that scraped past Khon Kaen last week. Filipovic was suspended. The captain formerly known as Meedech returned on the right side of a back three. Suchanon and Phosri replaced Seiya and Somyot.

The midseason break saw Customs rebuild their squad. Only four of the team that won in Chiang Mai in September started tonight’s match.

After their 2-2 draw with Chainat last week this match saw the return of their leading goalscorer Elias, who together with Yannarit replaced Ahamarasul and Kanok.

The first half plodded amiably along; Warut’s skidding shot was well saved by Kiadtiphon low to his right.

There was little protest when Gustavsson tucked the ball home from close range as the referee blew for a holding foul by Tawan on Kittiphap.

A Douglas shot from twenty yards had enough bend on it to make a movie but not enough to beat Kiadtiphon who made the save look straightforward.

Elias curled a 25 yard free kick wide of the far upright and at the other end Tawan headed a Phosri cross over the bar.

And that was half time and an opportunity for a serious discussion about our favourite Warwickshire cricketers. It was quite a list. Probably the highlight of the evening.

The second half questions were about how many chances Douglas would need before he at least hit the target and how long he could spend in the Chiang Mai penalty area before falling over.

His best chance came when he beat Sarawin on the left of the penalty area; bounced off the substitute Nawamin, and then scooped the ball over the crossbar with just the ‘keeper to beat.

Chiang Mai’s best opportunity came from a Phosri cross headed down by Narupon that Tawan, stooping in front of goal, was unable to convert.

Some of the visitors’ decision making was woeful; on the break they simply ran out of ideas; too often the glory long range effort was preferred to a more measured pass to a well-positioned team mate. Pongrawit and Sumeth were both wasteful.

The big Customs centre half, Laphouwich, who had a sound evening, headed an Elias cross onto the top of the crossbar and Kiadtiphon did very well to turn away Zarei’s bouncing header from a Tawin corner.

The young goalkeeper injured himself in the process and had to be replaced by Jaturong for the final five minutes. Kiadtiphon had made two notable saves and continues to impress.

Chiang Mai will be fairly relieved to have come away with a point. Customs will think that they had the possession and chances to win the match.

Meanwhile the crowd will all have wished that they had spent Saturday evening doing something else.