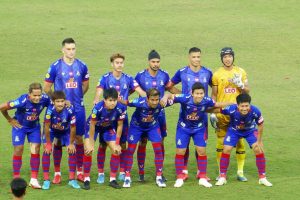 Evgeny Kabaev has not played since December. He replaced the hard working Patrick Gustavsson in the 79th minute as ten man Chiang Mai tried to hang on to their 1-0 lead.

Almost his first touch of the ball was to chase down Jaturong’s long clearance and break forward cutting inside between Nattawut and Do Yeon. With only the goalkeeper to beat the Russian forward found himself entangled with his own player, Tawan, and the ball dribbled wide of the near post.

At 2-0 the game would have been beyond Sukhothai.

Instead; Sukhothai broke forward. Melvin de Leeuw outjumped Veljko and Sarawin to reach Nattawut’s long ball forward to the left corner of the penalty area. The ball fell to Saharath whose low cross was behind Osman Sow but the big forward stretched out a leg to reach and backheel the ball past Jaturong. A clever, instinctive finish. 1-1 and more drama would follow.

It was a game of fine margins.

For Chiang Mai Jaturong replaced the injured Kiadtiphon in goal. Veljko returned after suspension and Somyot and Supasak also returned to the starting line-up. Seiya and Poomphat were both missing from the match day squad.

For Sukhothai Nattawut, Piyarat and Steinbauer all returned to the starting eleven.

Relegated from T1 last season Sukhothai started the game in second place eight points behind Trat but also 3 points ahead of third place Lamphun Warriors (who visit Trat over the weekend.) Sukhothai are the League’s leading goalscorers and strengthened their squad with the mid-season addition of Melvin de Leeuw from Chiang Mai United.

The early goal efforts reflected Sukhothai’s dominant possession. Anuchit’s long range shot was an easy catch for Jaturong and an interchange between de Leeuw and Chaowasit brought a solid diving save from the Chiang Mai goalkeeper.

But that was really it for Sukhothai as a first half offense. Despite enjoying most of the possession their early threat simply dissipated as they broke down in the final third.

Somyot picked up an early booking for dissent. This would prove costly later.

Then in the 27th minute, from nothing, Chiang Mai scored. Sow fell over too easily in the Chiang Mai penalty area. Narupon thumped the ball forward where Gustavsson ran onto the ball heading into space between Do Yeon and Steinbauer. Suchanon arrived at pace on the left and Gustavsson’s precision pass was the perfect invitation for a composed first time finish.

Chiang Mai’s first attack of the half; it came from nowhere; it came at pace and it was irrepressible.

Tawan might have added a second heading wide from Supasak’s left wing cross.

At the other end a miscued shot from Sow almost became an inch perfect pass for Chaowasit.

Half time. Chiang Mai led 1-0 and had rarely been under pressure from forty-five minutes of surprisingly impotent football from the visitors.

Sukhothai made three changes at the start of the second half to inject some urgency into their play. It was working as Sukhothai started to create some real chances mostly from the left side where Chiang Mai, it seemed, had no effective response.

Jaturong was hurt as he jumped with de Leeuw. He recovered and soon saved well with his right leg from Sow as the forward burst through three defenders. Another save at the near post from Sila was more straightforward.

The game would turn in the 71st minute when Somyot’s high challenge on Sow drew a second yellow card; a sending off. The Chiang Mai protests were muted. When you are on a yellow card that was not a great challenge.

Down to ten men this was now Canute versus the sea as the Chiang Mai defense tried to hold off wave after wave of Sukhothai attacks.

Jaturong bravely saved at point blank range from Sow as the forward tried to turn in de Leeuw’s left side cross.

Then Kabaev arrived and came so close to a second Chiang Mai goal; instead Sow equalized leaving Chiang Mai’s ten men to hang on with five minutes and injury time remaining.

The attacks kept coming down the left side. Jaturong dived to his left to keep out a de Leeuw shot. De Leeuw then volleyed Saharath’s cross wide of the far post.

But Kabaev was not finished. With Sukhothai pressing forward Sukhothai were exposed. Veljko fed Sarawin who spotted Kabaev’s run into the penalty area. Kabaev dragged the ball onto his right foot fifteen yards from goal – his well struck shot was too close to Kittipun who had waited unto the 92nd minute to make his first save.

There was one last act in this drama. Saharath found de Leeuw running into the penalty area; he held off Veljko to reach the by-line and chipped the ball into the six yard box. Jeong outjumped Narupon; the ball dropping to ground where the Korean forward reacted fastest to lash the ball home. It was the 94th minute.

Coach Dennis Amato and the Sukothai bench went wild. It was heartbreak for Chiang Mai who had, and this has been rare this season, played with real passion and commitment.

It had been a compelling second half. 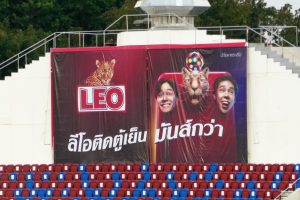