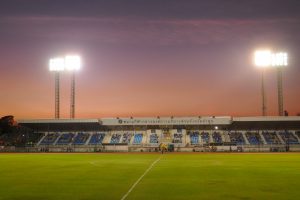 It would be all to easy to bore TLC readers with my endless reports from Chiang Mai FC.

Instead this occasional column will take trips around T2 and hopefully showcase some of the teams, towns and characters that make up this league.

And where better to start than the 12 February 2022 game between two of the three clubs promoted last season from T3; Lamphun Warriors and Muangkan United. Both now hoping to emulate Khon Kaen United and move from T3 to T1 in two seasons.

Two in-form teams. Lamphun were unbeaten since a 1-2 loss at home to Trat on 2 October. Muangkan had just one defeat since 10 October. Unexpectedly at home to Nakhon Pathom. Both teams with four wins and a draw since the January restart to the season.

Lamphun added Thales Lima (from Udon Thani) and Maung Maung Lwin (from Yangon) to their squad in the transfer window. Muangkan had a mid-season clear out and recruitment. Caion left. Da Silva (Assa) was retained. 15 goals in five games since the restart was an impressive return for the new look squad.

A more in depth look at Lamphun Warriors can wait for another day – but the club’s ambitions have been transformed by a new owner who has brought big name foreign players to the club, not just as window dressing but as part of an ambitious reach for T1 status. There are also plans for a new stadium in the next two years.

The stadium is one of those older style public sports facilities that has seen better days and would benefit so much from a coat of paint.

It is just over a kilometre south of the old city and Wat Phrathat Haripunchai; the ideal place to make merit before the game.

The main low-rise covered stand is by the road entrance on the west side. Tickets are available from a temporary booth. Food and drink are plentiful and can be taken into the stadium. The centre area of the stand is for players, families and VIPs. The temporary stand on the right side (as you enter) is for away supporters.

New floodlights were installed by the provincial authorities before the season. These are next to the existing four pylons. Even with eight sets of lights it is murky.

The Lamphun Ultras (Thai) and Fanaticos (everyone else) sit on the far (east) side on concrete steps in an uncovered stand. The two groups get along and are as welcoming as they are loud. It is also the best view of the game.

Tickets at Baht100 for this stand are available at the back of the stand – and again there are plenty of vendors. Just put your drinks into a cup before you take them into the ground – bottles are not allowed. Picnic hampers on the other hand appear not to be a problem.

The downside – there is no chance of hearing any of the public announcements. But that really is a minor detail.

There are no stands behind either goal and some excessive screening ensures that only a giant could watch the game for free. And there is of course a running track around the pitch.

Before the arrival of Aly Cissokho Lamphun was best known for its longan fruits. It was also the town where Chiang Mai residents go to escape their version of the big city.

The town has a tranquil, friendly and peaceful ambience. On matchday, at the stadium, that is transformed into a raucous welcome for visiting teams and match officials.

The town was founded by Queen Chama Thevi as the capital of the Haripunchai Kingdom – it is around 25 km (16 mi) south of Chiang Mai.

Rather overshadowed as a destination by Chiang Mai could it be that football is putting Lamphun back on the map?

The town is a mix of agricultural and industrial; the countryside has irrigated rice fields and longan orchards. There is a longan festival every August. But the Saharat group has built an industrial estate on the south of the city that is home to the likes of Hana Electronics, Pandora and Le Crueset. There is a (very good) 9 hole golf course and a rarely used short airstrip.

At Songkran there is a street market by the river; lanterns are released. But without the crowds and chaos of Chiang Mai. The local country and western band plays music by the river. Foreigners were rare even before Covid.

At Loy Krathong they have a lantern festival centered upon Wat Haripunchai but lighting up the city streets and the river.

Off the 1015 Highway just outside the town is The Terracotta Garden. It is an outdoor gallery, a working terracotta factory, a café and a garden. The terracotta art products are modelled on ancient S.E Asian styles, with influences that include Thailand, Cambodia and Indonesia.

Though the archway from the garden you can cross a pond by a bamboo bridge, which will bring you to a Khmer-style chedi which could be in Cambodia or Northeast Thailand. Statues, ornaments, and construction material are strewn about.

The garden is a gallery of this hybrid style.

This is the new Lamphun; creative and increasingly prosperous; but still deeply rooted in its past.

Do not go just for a football match – go and visit for a few days and immerse yourself in a different time and place.

This was fast paced and occasionally frenetic. Plenty of mistakes and no shortage of drama. It was a fine advertisement for T2 football. The highlights are online and are worth a look.

Lamphun were dominant in the first quarter and opened the scoring before Assa equalized for Muangkan just before half time.

Thales Lima converted a penalty to restore Lamphun’s lead. But it really should have been 2-2 when, unmarked, Assa headed from point blank range straight into the knees and shins of Cunningham in goal.

Lamphun’s third was from the effervescent Myanmar international, and man of the match, Maung Maung Lwin.

The Fanaticos will invite you to join them at a local bar. An alternative is a quick visit to the busy night market for fried pork and sticky rice. Either finishes off a good night.