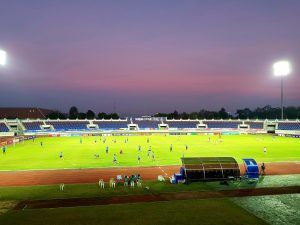 February raced by; four matchdays played as teams looked to find their form for the push to the end of the season.

Except, that is, for the leaders. Trat’s lead of 11 points over third place at the start of the month has been reduced to just six points and Lamphun have overtaken Sukhothai into the second automatic promotion spot.

The biggest surprise of the month came at Kasetsart last Sunday with their comfortable 2-0 win over Trat. It ended a poor month for the leaders whose only February win was against Covid-blighted Udon Thani.

Conrado and Babo have a solitary goal each in 2022. Trat were scoring two goals a game in the first half of the season; in 2022 it is just one a game. No one now fears Trat; not even Kasetsart’s diminutive Lao midfielder, Soukaphone, who squared up to Conrado in the second half; it would have been a non-contest. Both received a yellow card.

Lamphun and Lampang were the teams of the month; both unbeaten and each with three wins and a draw.

Lamphun opened the month with an away win a Trat. A solitary goal from Korean DaeHee Yong and some occasionally desperate defending earning the win. A goal a game from Thales Lima supported by Anuntachok, Mg Mg Lwin and Arthit has made Lamphun the in-form team; unbeaten in 2022 with six wins and two draws.

Lampang’s approach is a little different; their goals have been shared amongst nine players; the concern for Lampang fans is that the club still has to play all the remaining top eight teams (except for Udon Thani) in their remaining nine fixtures. By far the most difficult final games among the leading clubs.

Lampang are at home to Lamphun on March 20th. On 7 November the teams drew 3-3 in one of the games of the season; fans are hoping for a repeat.

With two successive defeats at the end of the month the questions for Sukhothai are how and when do they bounce back? The month started with a last gasp win at Chiang Mai and a thumping of Rayong. The loss at Muangkan was in part self-induced – failing to adapt their game to a mud bath. The lethargic loss at home to a resurgent Phrae United will have concerned coach Amato.

Udon Thani and Chainat (both on 41 points) make up the current play-off positions. Udon Thani got their season back on track with two very necessary wins, albeit not very convincing, against Rajpracha and Navy. There are more difficult games to come.

Chainat’s glimpses of brilliance brighten up any game without being regularly match winning. Wellington’s goal away at Khon Kaen was sublime but not enough for more than a draw.

Ten goals from Leandro da Silva (Assa) in 2022 keep Muangkan (38 points) challenging for a play-off spot; but the free-scoring unbeaten January slowed down in February as their away form stuttered to a loss at Lamphun and a 2-2 draw at Khon Kaen.

Contenders for promotion and play off places likely run down to Phrae (37 points) who are currently eighth.

Ayutthaya (32 points,) Kasetsart, Ranong and Nakhon Pathom (all on 30 points) all pulled clear of the bottom four clubs. Chiang Mai with just one point in February is the one mid-table club sliding in the wrong direction.

Nakhon Pathom have been one of the form sides in 2022 with just one defeat; they have not conceded a goal since 22 January.

Spare a kind thought for Navy. Four 0-1 defeats in their last five games; the other a 3-4 loss at Ayutthaya. While doomed to T3 next season they are going down with their colours still flying.

Then take two of the next three to go down with them. Rajpracha and Customs both struggle for goals and both clubs scored just once in February.

Customs, after a solid January lost four successive games in February to quickly join the other three clubs at the bottom of the League.

Rajpracha’s 0-1 loss at home to Udon Thani came from a 90th minute own goal. Where your form has gone your luck often follows.

One of these two clubs will join Khon Kaen who are masters of the battling draw against the stronger clubs but then losing by the odd goal to fellow-strugglers. Six points from safety is a big gap.

Customs, Phrae, Navy, Chiang Mai, and of course Udon Thani (who appear to change their coach more from habit than necessity) all fired and replaced their coach in February. With squads already in place and just nine games remaining is any real change in fortune possible?

One success is coach Thongchai Rungreangleas who has led Phrae through an unbeaten February. Their home match with Lamphun on 5 March will set expectations for both teams over the final games.

Nine games to go. Plenty still to play for. If you can, please do go and support your local team. The sport, the clubs and the players, need fans back in the stadiums across Thailand.