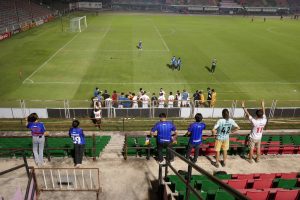 Two-nil down after 23 minutes the home side ‘s strong comeback either side of half time was good enough to share a point each in an entertaining game at Chainat’s Khaoplong stadium.

Chainat continue to press for a play-off place; though they do seem overly dependent on the efforts of Wellington Priori. He was a constant threat in the first half.

Narupon returned for Chiang Mai; Amornthep made a rare start in the absence of the injured Gustavsson. Kabaev and Seiya were both missing from the matchday squad.

Chiang Mai’s enterprising start was rewarded with the simplest of goals in the tenth minute. Suchanon took a free kick near the left corner flag and curled it to the near post where Danilo found space between Praranyu and Keeratikorn to head home from close range. A welcome goal from the Brazilian striker.

Chainat’s immediate response saw Kritsada shoot powerfully over the crossbar from the right side of the Chiang Mai penalty area.

Kiatiphon reacted sharply to touch Poomipat’s rasping shot over the bar from a Chainat corner.

But it was Chiang Mai who extended their lead with a counter-attack. Wellington was crowded off the ball in his own half; Somyot launched the ball forward for Danilo to run onto down the left side and his unselfish low cross was slid home by Suchanon; a reward for his excellent supporting run.

Kiatiphon saved from Kritsada as Chainat started to apply pressure. Wellington moved forward from midfield into the front line and with four up front Chiang Mai’s back three looked beleaguered. Too many clearances that should have gone long and wide instead fell in front of goal at the edge of the penalty area.

In the 32nd minute a header from Narupon was picked up by Mongkonchai; he laid the ball off to Anuwat and his powerful 25 yard drive gave Kiatiphon no chance clattering into the goal off the woodwork. It was a terrific strike.

The pressure from Chainat was intense. Poomipat shot powerfully straight at the Chiang Mai goalkeeper; Wellington, who always seemed to find space, pulled a shot inches wide. But Chiang Mai hung on and led 2-1 at half-time.

The second half started as the first half finished with all the pressure coming from Chainat. Warayut hit the post with an unchallenged header from a corner.

But, and the heat and humidity may well have been a factor, Chainat appeared to run out of steam. Chiang Mai moved to a back five; Wellington no longer had space and largely disappeared from the game and Chainat seemed to run out of ideas. Mongkonchai headed straight at Kiatiphon from a narrow angle and the keeper gathered at the feet of Wellington after a through ball from substitute Badar Ali; but that was all Chainat had.

It was Chiang Mai who might have stolen a winner in the final minutes with two counter attacks. Firstly Danilo broke on the left and his firm cross was well gathered by the diminutive Chainat keeper, Siraset, in front of Tawan. Then in the last seconds of injury time Tawan galloped down the right and Danilo, under huge pressure from Keeratikorn, was unable to get a decisive touch to his cross.

2-2 was fair. It was a good battling response from Chiang Mai after the change of coach at the start of the week.