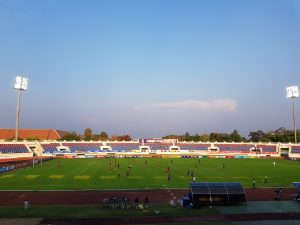 On a broiling late afternoon in Chiang Mai the home team were eventually well beaten by a resilient Muangkan team that seems able to perform on the pitch despite the ongoing distraction of their financial issues behind the scenes.

The latest casualty of this uncertainty is the club’s leading scorer and ten year veteran of Thai football, Leandro da Silva (Assa) who appears to be in dispute with the club, and may even have returned to Brazil. He has now missed the last two games; yet Muangkan have won both, away from home at Ranong and now at Chiang Mai.

Another indication of their problems is that they arrived with just seven substitutes, including two substitute goalkeepers. The cupboard does appear to be rather bare.

Chiang Mai made one change from last week’s away trip to Chainat with Tawan replacing Amornthep. The back three were the same faces but in different positions with Narupon moving to the troublesome left side; Veljko in the middle and Watcharin on the right.

In front of a crowd of (officially) 716 the game started slowly. Kento Nagasaki came close to connecting with a ball chipped in from the left side and at the other end Somyot blazed high and wide from a smart pass by Tawan who looked lively in the early stages.

Good hold up play by Nagasaki set up Rattasak for a shot that cleared the crossbar from the left corner of the penalty area.

Controversy followed midway through the half. Narupon, wide left, chipped a ball into the penalty area for Tawan to chase. Jakkrit clearly handled the ball defending near his goal line. The referee had an excellent view but, and despite the Chiang Mai protests, he only awarded a corner. Narupon shook his head in bemusement.

The remaining twenty minutes of the half belonged mostly to Muangkan. Marlon Silva’s header bounced off the Chiang Mai crossbar with Kiatiphon, looking like a Persil advertisement in an all-white goalkeeping kit, stranded.

The Chiang Mai goalkeeper then saved well from Pongpat’s low shot as the forward had time to turn inside the Chiang Mai area.

Thirty-nine minutes gone and the ball was substituted – presumably for being as flat in that heat as most of the players,

A rare attack at pace from Chiang Mai found Tawan in space on the left side of the Muangkan penalty area. His extra touch before getting his shot away allowed Marlon Silva to launch himself into a fully- committed block; it was very solid defending.

Then on the stroke of half time Muangkan opened the scoring with a gem of a solo goal from Pongpat; who with his back to goal some thirty yards out on the left side, turned and left Watcharin in his wake, dragged the ball onto his right foot and curled an unstoppable shot beyond Kiatiphon and inside the far post.

The second half restarted with Gustavsson on for Somyot; after a three week injury layoff he was to make little impact.

But it was Chiang Mai that had the early chances after the break. The referee rather generously gave a free kick for Marlon Silva’s challenge on Gustavsson. Just over 20 yards from goal it was in the ideal position for Pongrawit to curl a left foot shot that was well saved by Chinnapong diving to his right to punch the ball away.

The goalkeeper’s next action was far less impressive. Pongrawit in his own half lifted the ball forward for Sumeth to run onto down the left side; the goalkeeper came charging from his area; half stopped, then charged again. Sumeth reached the ball first and needed just one touch to guide the ball past the keeper and inside the far post. It was a smart finish and his first goal of the season.

Five minutes later Muangkan had restored their lead. It was a fine goal that started with Jonatan Reis winning the ball outside his own penalty area; turning in space and then releasing Kento Nagasaki on the left. Reis ran on for the return pass from Nagasaki, leaving Narupon trailing behind him. Reis’ low cross fell to Pongpat arriving at the back post, long ahead of his marker, Sumeth, and he guided the ball home from close range. It was a very good goal but also some tired and uncommitted defending.

Ten minutes later Muangkan’s third was described all too accurately by my neighbour as a “comedy of errors.” Reis’ little reverse pass on the edge of the Chiang Mai area set up the veteran boxer, Suchao; his shot was well saved low to his left by Kiatiphon. Pongpat pounced on the rebound ahead of Chaiyapruek; his low cross skewed up high off Narupon’s left foot, spinning and falling under the crossbar in front of the goal; Narupon and the Muangkan substitute, Guntapon, both jumped for the ball and in nestled in the back of the net. Who got the last touch is a mystery though I am sure Guntapon will claim it.

Guntapon and Suchao both had chances to add a fourth and in the last minute of normal time, Amornthep tried to make space for a left foot shot in the Muangkan area and was well blocked by Jakkrit.

Muangkan for all their problems still look like a team, that if they can keep enough players, could be in the playoffs; they worked hard; defended solidly and in Reis and Pongpat had players to create and score goals.

It was more of the same from Chiang Mai. A limited threat up front and ponderous, and in some cases just not good enough, in defense.

Chiang Mai’s next three games are away at Phrae and then home to Lampang and Trat. Further points could remain elusive.