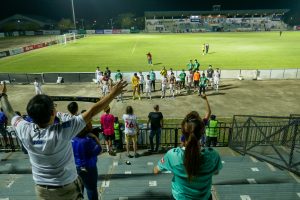 On 24 October 2020, in the early days of the Covid-extended 2020/2021 season Chiang Mai came to Phrae and ended the home club’s unbeaten four year home record with a fine 3-1 win with goals from Nieblas, Nattachai and Atthawit (who is now at Phrae.)

Roll forward to 2022; all of the Chiang Mai 2020 vintage have left the club; their replacements have not been good enough and Chiang Mai are in 14th place and hoping that Rajpracha and Customs do not suddenly decide to win a couple of their final matches.

This was poor. Be honest, this was awful.

Phrae are unbeaten at home since 31 October 2021 when they lost to Ranong. They also lost away at Ranong last weekend. Only five of that team remained in tonight’s starting line-up. Arson and Carlos Santos make a very assured centre-back partnership; two Chiang Mai alumni were in the Phrae starting eleven, Atthawit and Sa-Ardchom. Pathomtat returned in goal in a fetching all pink number, including socks and boots, that left him resembling a slimline blancmange. Goalkeepers in pink. Lev Yashin would not have approved.

Chiang Mai gave starts to Phosri, Seiya, Supasak and Gustavsson. Veljko and Narupon were joined in the back three by Pinyo playing on the right side; and defensively resembling a fish out of water. This was an experiment that did not work and which gave far too much space to Taku Ito. Where is the club captain?

The early pressure all came from Phrae; more as a trickle than a flood. Not a lot was happening.

A Wellington Smith shot was well blocked by Phosri following a deep cross from Taku Ito on the left side.

Smith then stooped to head a low Taku cross wide of the far post.

Decha Sa-Ardchom was booked for a hack at Seiya’s shins. His look of innocence fooling no-one.

The opening goal came in the 32nd minute. Atthawit’s inswinging corner looked too close to Kiadtiphon’s goal. Rather than catch the ball, and under little pressure, the tall goalkeeper punched clear. The ball fell for Nattayot who had enough time to take one touch before launching a right foot shot from 22 yards past the right hand of the possibly unsighted Kiadtiphon.

It should have been 2-0 minutes later. Wuthiphan’s cross falling to Smith, inexplicably unmarked in front of goal. Kiadtiphon was smartly off his line to make a good block.

Chiang Mai’s one chance of the half followed immediately with Seiya’s close range shot saved by Pathomtat’s right foot.

Half time came with a deserved one-nil lead for the home team which they doubled within two minutes of the restart; hopelessly exposing Chiang Mai’s defensive frailties as Wuthiphan’s low cross from the right reached the unmarked Smith by the penalty spot where he slid the ball beyond Kiadtiphon.

The third goal was inevitable. Atthawit’s measured pass from the middle of his own half was played behind Narupon for Wuthiphan to run onto. Veljko raising an arm in a forlorn plea for offside. Two on one leaving Kiadtiphon no chance as the ball was pushed wide for Maranhao to have a simple tap in in front of goal.

Veljko salvaged some pride for the defense with a good block on Maranhao. But the Chiang Mai performance was summed up by Sarawin’s injury time free kick thirty yards out from goal that was neither a cross nor a shot and sailed horribly high and wide.

Chiang Mai now have three successive home games; Lampang; Trat and Navy. One win from their final six games is probably enough to be safe. But this already feels like a season that both players and supporters would like to end soon.