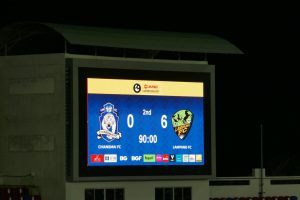 Humiliated. There is no other word to describe the white flag that was waved by Chiang Mai FC in this 0-6 drubbing by a Lampang FC team that hardly needed to try.

The home side made seven changes from the starting line up that lost 0-3 at Phrae last weekend. Kiadtiphon and Gustavsson are away with the Thai under-23 side in Dubai. Veljko was also missing, apparently due to injury; Danilo was on the substitutes bench.

Lampang were sufficiently confident to be able to rest their two leading scorers, Deyvison and Weerayut, who only appeared as 55th minute substitutes. The abrasive Coutinho was also missing from the squad.

This was also a match-up between two teams that are controlled by League 1 clubs, the Lampang starting XI included nine players transferred to the club from Nongbua Pitchaya and its subsidiary club, Udon United.

The Brazilian Massaro, making a rare start, was at the heart of Lampang’s early attacks. He drilled a shot over the crossbar from eight yards, curled a twenty-yard shot narrowly wide of the far post and beat Pinyo down the left side before shooting high and wide.

At the other end Tawan ran at pace onto Seiya’s measured pass into the Lampang penalty area; but arrived at the same time as the defensive cover from Adisak and goalkeeper Yen-Arrom.

The opening goal came after 33 minutes. Massaro’s near post header from a corner rebounded down from the crossbar where Anisong was able to hook the ball home while Narupon with some justification claimed that the Lampang player’s foot was dangerously high.

The second goal came in injury time at the end of the first half. A fluent passing move down the right side saw Kitsana’s pass find Jakkrawut in space in the penalty area and he calmly slid the ball inside Jaturong’s far post.

Chiang Mai had two early second half chances; Seiya volleying over from eight yards under pressure from the advancing goalkeeper; Pinyo’s cross then evaded the goalkeeper but bounced past the far post from the head of Jakkrit as he and Danilo, on at half time for Suchanon, jumped for the ball.

The arrival of Deyvison and Weerayut was to prove decisive. Weerayut tapping in the third after Jakkrit’s run and low cross from the goal line.

Deyvison calmy ran in the fourth after Narupon had failed to deal with a long ball forward from Anisong.

Danilo came closest to a consolation effort for Chiang Mai when his looping slow-motion header bounced back off the far post and was pawed away by the goalkeeper.

Anisong added the fifth wrapping a leg around Narupon to reach a right side corner and then following up to poke home the loose ball before Jaturong could gather, while the Chiang Mai defense stood static.

Deyvison added a sixth thanks to good work on the left from Weerayut whose run on goal was blocked by Jaturong but the Lampang forward still had time to turn and to pick out a cross for Deyvison at the far post who easily out jumped Supasak to powerfully head home.

With just three points in the last nine games Chiang Mai are sinking quickly towards the final relegation place and on this evidence there is little to suggest any change in fortune over the remaining five games.