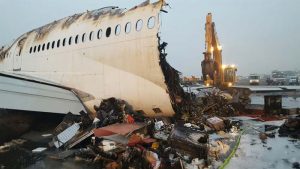 This page will link to article from Dubai media outlets and sometimes from other sensible newspapers or agencies. It will also link to or report on any official announcements.

It will not name any of the crew until their names are officially released. There will be no speculation from me on what happened.

The accident was at Dubai airfield. Local laws and procedures are different. There is not the same rush of disclosure as for instance the NTSB reveals for incidents in the USA, such as Asiana at SFO or USAirways on the Hudson River.

The bare details are that:

At around 12.40pm on Wednesday 3 August 2016 Emirates flight 521 crashed on landing at Dubai international at the end of a regional flight from Trivandrum (Thiruvananthapuram).

Remarkably all 282 passengers and 18 crew were safely evacuated before fire burned out the fuselage. A great job by the cabin crew and airport rescue teams.

Windshear was reported on all runways at the time of landing.

The airframe was a thirteen year old Boeing 777-300, registration A6-EMW.

The ATC recording suggests a normal approach with no priority requested or emergency declared. The first officer was making the radio calls; the captain would therefore be the pilot flying.

Tower advised EK521 to on landing to vacate at taxiway M9 and cleared the aircraft to land.

The crew appear to have then attempted a go-around and the tower instructed the aircraft to climb to 4000 feet.

The aircraft however did not climb, but after retracting the gear touched down on the runway and slid to a rest at the end of 12L.

A few seconds later tower instructs the next arrival to go around and alerts emergency services.

All occupants evacuated via slides; 13 passengers received minor injuries, 10 were taken to hospitals, 3 were treated at the airport. The aircraft burned. A firefighter attending to the aircraft lost his life.

The airline reported: “Emirates can confirm that an incident happened at Dubai International Airport on 3rd August 2016 at about 12.45pm local time.”

Here is a transcript of the ATC

Peter Lemme at www.satcom.guru has produced this detailed analysis of the ADS-B data from EK521. Worth a read. This will all be reviewed in detail as part of the investigation.

His analysis is very detailed – but sensible avoids reaching conclusions. An interim report from the investigators is expected within the month.

Byron Bailey was a senior captain with Emirates for 15 years – he wrote this opinion piece for The Australian on 9 August:

Emirates B777 crash was accident waiting to happen

Still no mention of EK521 on the GCAA website.

The Gulf News cited passengers as saying they had received emails from the airline on Tuesday confirming the amount, totalling about $7,000 per passenger.

An Emirates spokesperson confirmed to The Gulf News that the carrier had offered passengers financial assistance to meet their immediate needs and cover lost baggage items, medical costs and other expenses.

The airline also said it was refunding their tickets.

Yes you did read that right: Mohammad Basheer Abdul Khadar, who was on board flight EK521 when it crash at Dubai International, had purchased his ticket on his way for a vacation with his family in Thiruvananthapuram in the south Indian state of Kerala.

Khadar has lived and worked in Dubai for 37 years returning home to Kerala to spend one month a year with his family.

He was one of the passengers on EK521. One week later his Dubai Duty Free lottery ticket wins him US$1million.

He described his escape along with other passengers from the Emirates plane as a “miracle”.

“If you ask me about my plans, I obviously want to help the children in Kerala who are less fortunate than others and need some financial help and medical support. I don’t want to give it to a charity or build a business, I want to go out and find people who really need help and give them money. I was poor, and I know what people go through,” he told Gulf News.

**************************
Here is an interesting perspective (which I have already hinted at on the August AOB page) on the passengers scrambling to take baggage with them from the crashed airliner:

Emirates crash: When you don’t own your liberty and property, your possessions become most important

The timing of this message is probably not a coincidence:

Online rumours are of course not a problem if they are in the local newspapers!

For reasons I do not fully understand an Australian PR company (they may be involved with EK or an EK lobbyist) has continued to heap praise on the response to the crash by Emirates and the authorities.

Here are my thoughts on their bizarre involvement. They have blocked me and other friends from their twitter feed!

It took over three years for Dubai’s GCAA as the investigating authority to issue their final report. Quite why it took so long is a mystery. It was not a complex investigation. The passengers and crew all survived. The black boxes were quickly recovered. The plane crash landed at its home airport.

Without saying so specifically the crash was pilot error.

Some details from the report:

The 34 year old captain had operated 135 flights in the 12-month period prior to the crash. He had completed 66 landings, as pilot flying – only 9 of the landings were performed at DXB.

When the Commander decided to initiate the go-around, he pushed the TO/GA switch while the switches were inhibited, unaware that the Autothrottle would not have moved the thrust levers.”

“The Investigation believes that both the Commander and the Copilot did not have sufficient guidance on how to perform a normal go-around just prior to touchdown or after touchdown because Emirates training sessions that they both attended did not include these scenarios.”

“The decision to go-around was the correct decision as the Operator’s policy requires a go-around to be flown if the pilot is unable to land within the touchdown zone.” This was a conclusion of the report; it seems very questionable. Policy is no use if it endangers lives. They still had over 10,000 feet of available runway.

“The Copilot as the pilot monitoring did not believe that there was a need to question the Aircraft state and therefore he did not apply the CRM trigger word ‘uncomfortable’ to express a concern during the landing and go-around.”

“The aircraft had stopped for one minutes before the Captain ordered the evacuation.” Why the delay?

“Expediting the evacuation command could have attracted the attention of passengers at an early stage and reduced the opportunity for pax to gather their belongings.”

“Approx 9 mins and 40 secs after the Aircraft came to rest, the center wing tank exploded which caused a large section of the right wing upper skin to be liberated.

As the panel fell to the ground, it struck and fatally injured a firefighter.”

The only fatality that day.

“The Investigation concludes that the cabin crew successfully managed the passenger evacuation to the highest professional standard, in line with their training, considering the numerous challenges they faced. ”

Evacuation – this was the availability of the emergency exits:

“There was only one serviceable escape slide on the upwind (left side) of the Aircraft and the cabin crewmembers were forced to evacuate most passengers into the smoke and firefighting activities using the available right side exits.”

“The cabin crew were left with no choice but to let the passengers evacuate with their bags. The risk of damaging the two remaining useable slides was high, with potentially catastrophic consequences. ”

“There was only one serviceable escape slide on the upwind (left side) of the Aircraft and the cabin crewmembers were forced to evacuate most passengers into the smoke and firefighting activities using the available right side exits.”