Dubai once again caught the attention of the world at the new year but not in the way that the city had hoped.

Some three hours before the midnight fireworks at the Burj Khalifa a serious fire broke out in the adjacent Address Downtown hotel.

The fire spread quickly as it lit up the night sky. It appears that the use of non fore-resistant cladding on the building facade meant that the fire engulfed the front of the building.

It was New Year’s Eve. Bars and restaurants were packed. People had booked parties in hotel rooms to see the fireworks.

Miraculously – given how serious the fire appeared – hotel staff and rescue services evacuated the hotel with by all accounts just 15 minor injuries to guests and staff. No fatalities were reported.

Debris from the building blew onto surrounding grounds and rooftops. But no other fires started and the fore at the Address could be contained. It was however still burning in places the following morning.

The authorities took a decision to continue with the fireworks from the Burj. Although fireworks on adjacent buildings were not released. No explanation was given of the reason to proceed while the hotel burned in the background.

Were the authorities certain that there were no casualties; that everyone had been evacuated.

Were the authorities certain that it was better to proceed rather than cancel the fireworks and leave hundreds of thousands of people wandering downtown and perhaps hindering the rescue and recovery work.

What was clear is that some of the official PR was inappropriate. Auto tweets has been set to post after midnight. There was no thought that anything could go wrong.

The Editor of the Gulf News: Abdul Hamid Ahmad @AbdulHamidAhmad The show goes on and Dubai surprises the world #MyDubaiNewYear

The trouble was we had no idea if people were still trapped in the burning building….or indeed whether the fire would spread. 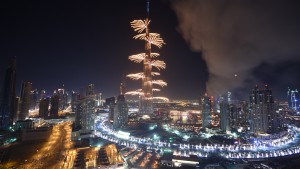 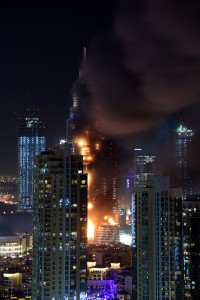 This is a timelapse taken that evening – it looks like it was after the midnight fireworks:

The hotel will be rebuilt. But the wider issue is just how safe are Dubai’s tall towers – fire resistant cladding was only required by law after 2012. 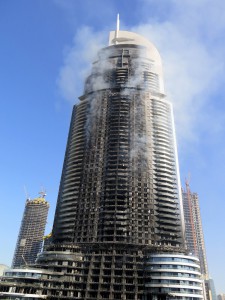