Pattaya is Thailand’s cess-pool of vice. Parts are a grim town of prostitution and drugs. It can also be quite fun as well and there is some great golf nearby! But that may be a story for another day

Until now playing Bridge was never seen as one of those vices.

Just a hint to the Pattaya police – if they want to clean up a combined washroom and poker club might be the answer. 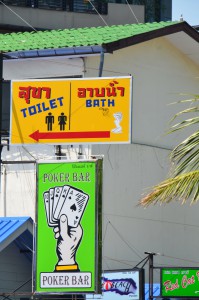 But yesterday afternoon a  group of elderly bridge players were surprised by a visit from the police on Wednesday.

Thirty-two foreigners, including British, Swedish, Norwegian and Australian citizens, were arrested during the anti-gambling raid.

They said they were not playing for money, but were held for possessing too many unregistered playing cards.

Thailand’s military rulers have vowed to crack down on corruption and crime.

The players were released on bail on Thursday, after 12 hours in custody.

An 84-year-old Dutch woman was also among those held.

There is a video of teh raid on youtube – unfortunately in Thai only.

The Army, Pattaya Police and District Officials, conducted a raid on a 2nd floor rented room abive a soi 2 restaurant South Pattaya after a tip-off from an informant of a regular gathering of foreign nationals above the Alto’s Restaurant & Bar in Soi 2 off the Thappraya Road in South Pattaya. The Jomtien & Pattaya Bridge Club have met there 3 times a week since 1994.

Over 50 officers stormed the premises and found 8 tables and 32 foreign nationals, consisting of 26 men and 6 women playing cards.

As usual the police arrived with an army of media journalists and camera crews so that they could show there fine detective work and that they were clamping down on a serious vice issue.

No money was changing hands, however the officers scoured the law books and found an offense was being committed and therefore the alleged organizer of the event, Mr. Jeremy Watson aged 74 from UK was detained for further questioning.

Computers, Decks of Cards and a book with results of the Bridge games were seized by officers as evidence.

The raid will concern other Bridge club organizers in Pattaya who assumed their gatherings were not breaking any of Thailand’s Anti-Gambling Laws.

All 32 card players were arrested and eventually released from Pattaya Police Station at 03.00am after almost 12 hours in custody and paying 5,000 Baht in bail each.

While police are still carrying out further investigations the foreign media have all picked up on the story with uniform incredulity.