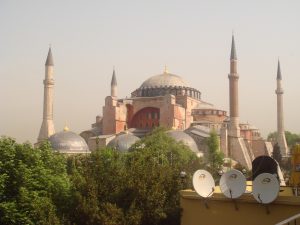 Staging a coup is a bit like a goalkeeper trying to catch a cross in soccer.

If you are going to do it make sure that you do it properly – else the repercussions will be severe.

Turkey’s failed coup of 16 July appears to have been poorly led, poorly-executed and poorly-supported.

That said it may have been surprisingly close to success.

The insurrection started on Friday night as troops seized two bridges in Istanbul.

For the coup to have succeeded it required backing across the armed forces. A large number of soldiers may have been involved, and in several Turkish cities.

Tanks took to the streets and the bridge across the Bosphorus in Istanbul was taken over.

President Erdogan was not heard from for hours. He finally addressed the nation from an undisclosed location, speaking to a tv network on his cellphone’s FaceTime app — a dramatic scene that seemed to suggest a man on the verge of losing power.

But in the early hours of Saturday, he landed in Istanbul, and was heard. Erdogan’s supporters took to the streets. They climbed onto tanks to stop the military action.

“This attempted coup collapsed before it even started,” said Fadi Hakura of UK-based Chatham House, who said it was amateurish and failed to attract broad military support.

Mr. Erdogan has placed blame for the intrigue on the followers of Fethullah Gulen, a Muslim cleric living in exile in Pennsylvania, who was the president’s ally until a bitter falling out three years ago.

Mr. Gulen’s followers are known to have a strong presence in Turkey’s police and judiciary, but less so in the military.

Mr. Gulen condemned the coup, denied any link to it and expressed support for the democratic process, saying that “through military intervention, democracy cannot be achieved.”

The Turkish Prime Minister has stated that the death toll in the clashes is 232, including civilians, pro-government forces and troops involved in the coup attempt, with 1,541 people wounded.

Turkey has a long history of military involvement in politics — there have been three coups since 1960.

The country itself has become deeply polarized in recent years between supporters of Mr. Erdogan’s Islamist government and those loyal to Turkey’s secular traditions.

It may be that the coup reflects those divisions and a concern that Mr. Erdogan was simply becoming too powerful. Now given the coup’s failure his power has multiplied. For now.

Even those bitterly opposed to Mr. Erdogan appear to have no desire for a return to military rule.

In the few days following the coup attempt more than 50,000 people were rounded up, sacked or suspended from their jobs by Turkey’s government.

There has been a purge of those deemed disloyal to President Erdogan – this has included teachers, university deans and the media.

Mr Erdogan has used force to re-impose stability amid the turmoil.

He is unlikely to convince either the country or Turkey’s allies abroad that he is not embarking on a witch-hunt against his many critics.

In the last week Turkish media announced that:

15,200 teachers and other education staff had been sacked
1,577 university deans were ordered to resign
8,777 interior ministry workers were dismissed
1,500 staff in the finance ministry had been fired
257 people working in the prime minister’s office were sacked

The removal of thousands of officials has alarmed international observers, with the UN urging Turkey to uphold the rule of law and defend human rights.

The President of the European Parliament, Martin Schulz, has accused Turkey of carrying out “revenge” against its opponents and critics.

He also said a debate around restoring the death penalty was “deeply worrying”. The EU has warned such a move would end talks over Turkey joining the bloc.

Turkey also issued a blanket travel ban on all academics in the country. A senior Turkish official described the travel ban on academics as just a “temporary measure.” Many academics have been critical of Erdogan in the past.

Now Turkey’s parliament has approved a bill declaring a state of emergency and has informed the Council of Europe of a partial withdrawal from the European convention on human rights.

Turkey will be required to provide regular updates to the secretary general of the Council of Europe on the measures taken under the state of emergency, according to the terms of the treaty.

The three-month state of emergency will allow the government to rule by decree, passing bills that have the force of law unless they are overturned by parliament; unlikely given that the majority of MPs belong to the ruling Justice and Development party.

The real divisions within Turkey are not so easily resolved by a security sweep that will only only sweep political differences under the carpet.