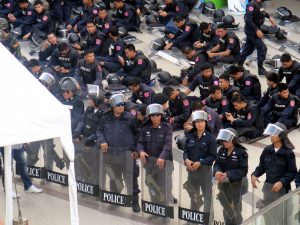 The big story uniting Germany and Thailand this week has been “Tattoogate.”

This involves Thailand’s Crown Prince being photographed at Munich Airport showing extensive torso and arm tattoos underneath the smallest of crop tops. The pictures were released by the Bild newspaper last Thursday.

The Crown Prince had with him an entourage of staff, his new wife, a poodle and the crew of his flight.

The report also noted that the Prince has acquired a substantial Bavarian home.

Alerted to the pictures ny ex Reuters colleague, Andrew MacGregor Marshall, posted the pictures and a link to the Bild story on his facebook page.

Andrew works in Australia, no longer with Reuters. Andrew was working in Hong Kong last week.

His Thai wife, Noppawan Bunluesilp (“Ploy”), is also a journalist – ex Reuters and NBC. She was visiting her family in Bangkok, together with their three year old son. Andrew has been unable to return to Thailand since 2011.

At dawn on Friday morning twenty Thai police raided K. Ploy’s family home. Ploy, her three year old son and her father were taken to the Crime Investigation Bureau head office in Bangkok and detained for eight hours. The police examined her computer and mobile phone.

The police made it clear that the raid was the result of Andrew posting the Crown Prince pictures on his personal facebook account.

Pol Lt Gen Thitirat Nongharnpitak, commander of the Central Investigation Bureau in Bangkok, said the photos of the Crown Prince were altered and were ‘deemed inappropriate.’

Thitirat said that Andrew Marshall, together with two Thais, produced pictures and disseminated misinformation via social media and the investigation found that about 30 people were involved, the commissioner said.

No evidence has been produced to support this claim.

According to Agence France-Presse, the commander of Thailand’s Central Investigation Bureau, Thitirat Nongharnpitak, told reporters the pictures were doctored, saying “the culprit is Andrew MacGregor Marshall who has violated lèse-majesté laws for several years.”

A spokeswoman for the Axel Springer SE (the owners of Bild newspaper) clarified: “BILD has verified the authenticity of the photos. The reader-reporter is not Andrew McGregor Marshall. ”

But what does it matter? How are these pictures inappropriate or insulting to the Crown Prince. They are pictures of him dressed as he wished to dress. And it is not the first time he has been photographed at Munich Airport.

He has to have known that even at a private part of the airfield there would be enough staff or public with mobile phones or cameras ready to take a picture or what was clearly a celebrity arrival.

K. Ploy and her family were released without charge after about eight hours. They are now in Scotland. It is likely that their detention was meant to encourage Andrew Marshall to back off from his reporting on Thailand. That is unlikely to happen.

A crown prince and German affairs by Pavin Chachavalpongpun