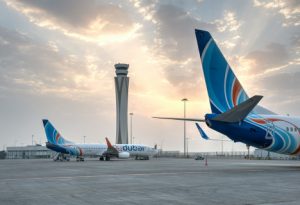 In a press release today Dubai airports trumpeted that the airport “is now gaining ground in the region as a popular airport for passengers with traffic surging 161 per cent in the third quarter.”

That depends where you star. So let’s have a look at this:

There are 92 days in Q3. So just 2,086 passengers a day. Assume an even spread between arrivals and departures and that is just over 1,000 people a day leaving or arriving.

Qatar Airways and Wizz Air are the other two other carriers carrying out scheduled passenger operations from DWC. Qatar Airways operates four flights a day from Doha. Wizz Air does not operate daily.

Commenting on the results, Paul Griffiths, CEO of Dubai Airports, said, “we are very happy with the way passenger traffic has been growing at DWC….by the end of next year the airport will see tremendous growth as it becomes the new home for flydubai. The project to expand the annual capacity of the passenger terminal at DWC from 5 million to 26 million passengers in underway and on track to be completed by the third quarter of 2017.”

Dubai Airports will need to do something dramatic with DWC airport access before the end of 2017; which is currently served by an hourly bus connection to the metro or by expensive taxis.