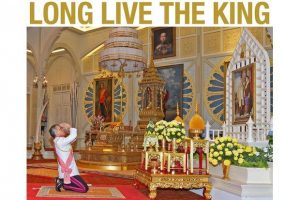 The Kingdom has a new King after His Royal Highness Crown Prince Maha Vajiralongkorn on Thursday accepted an invitation to ascend the throne from the National Legislative Assembly president.

Please credit and share this article with others using this link:http://www.bangkokpost.com/news/general/1149219/crown-prince-becomes-king. View our policies at http://goo.gl/9HgTd and http://goo.gl/ou6Ip. © Post Publishing PCL. All rights reserved.

Although there has been a seven week delay the date of the succession has been back-dated (only in Thailand) to the date of King Bhumibol’s death.

Here is the Economist’s commentary on the succession.

Thailand has a new king – Economist

“For two centuries a hoary prophecy held that Thailand’s Chakri dynasty would produce no more than nine kings. That curse was lifted in Bangkok on December 1st, when authorities formally proclaimed that Crown Prince Maha Vajiralongkorn had become King Rama X.

The televised announcement ended an odd interregnum following the death of King Bhumibol Adulyadej on October 13th. That evening the government reported that the prince had chosen to delay taking the throne, to allow more time to grieve. This breached the palace’s own rules and surprised the junta, igniting fears among outsiders that the succession was being contested behind the scenes. The high-living prince is unpopular among Thais and loathed by the elites, many of whom would have preferred his younger sister, Princess Sirindhorn, as monarch.

As it turns out, the seven-week hiatus may have slightly improved King Vajiralongkorn’s standing among Thai royalists. At least some of them have accepted his foot-dragging as a mark of respect for his late father. He has managed to look regal at a series of processions and ceremonies (unlike in July, when paparazzi spotted him at a German airport sporting a too-small vest that revealed lurid temporary tattoos). Censors have embarked on a fresh effort to block local and foreign websites that carry criticism of him, a grave crime under Thailand’s lèse-majesté laws.

The assumption for now is that the new king—whose powers are only loosely defined by law—will continue to spend much of his time in Germany, near Munich, where he maintains a court of around 200 people and to which he has retreated several times in the weeks since his father’s death. Such an arrangement might suit the junta, which would prefer him not to meddle bluntly in the country’s politics. At some point the appointment of a new Privy Council will give observers a better indication of how actively King Vajiralongkorn intends to reign. So might a soon-expected reshuffle at the Crown Property Bureau, an institution which manages the royal family’s investments and which is thought to command more than $50bn.

Thailand is still only at the start of a long period of national mourning, which will continue until King Bhumibol’s cremation next October. Officials are planning an ornate pyre on a parade ground in the capital, topped by a 50-metre spire. King Vajiralongkorn’s coronation ceremony will follow, perhaps in 2018. Having insisted that all this will not impede a general election scheduled for the end of next year—the first since a coup two-and-a-half years ago—members of the junta are now hinting that the vote may get pushed back.

The only certainty is that Thailand’s leaders will continue to rely heavily on the late king’s prestige. Since his death his portraits have multiplied around the capital. Officials say his birthday, December 5th, will remain a public holiday; this year’s celebrations will include the auspicious assembly of 999 monks. Glorifying King Bhumibol has helped Bangkok’s elites hang on to a dusty political culture which reveres rank, rewards status and devalues electoral democracy. They will not want to let the succession break the spell.”