Iceland is currently one of the places to visit. But it may soon be overwhelmed by its own success. 2.3 million visitors are expected in 2017. Yet the population is not so much over 300,000.

The tourist infrastructure is creaking; prices are escalating and the Icelandic Krona is back at the dangerous pre-crisis levels of 2008.

So we come to the last week of May 2017. From Keflavik airport we drove (anti-clockwise) around the island. We drove a 4×4. The better handling and higher ride is a bonus on the roads. About 1,600kms in six days with a couple of nights in Reykjavik at the end of the trip.

I was expecting awe-inspiring moments of stunning, rugged landscapes. Iceland lives up to that promise.

However, the big risk of an Iceland holiday is the weather, and it was not on our side. Rain every day; often heavy. And cold!

The other thing that needs to be said up front is that Iceland is expensive – especially accommodation and food costs.

Here is our route: 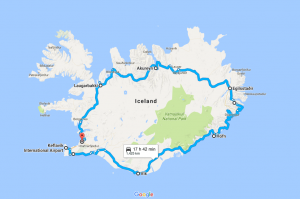 Our overnight stops were in Vik on the south coast – next to the black sands at Reynisfjara beach. The drive from Keflavik airport included stops at Skógafoss waterfall and Seljalandsfoss waterfall.

We were to overdose on waterfalls.

Vik itself was a quiet and rather nondescript little town. The restaurant next to our hotel was poor and meant a quick pre-closing trip to the supermarket. It rained…a lot.

Night two was in Hofn after a day of glaciers. Hofn is a nice small fishing town on the east coast.

Night three was in the transit town of Egilsstadir; in an hotel opposite the town’s football ground. They do love their football!

The drive up the east coast from Vik to Egilsstadir was my favorite two days of the trip. Stunning coastline and behind that the glaciers of the national park.

Night four was in Iceland’s second city – Akureyri. In the north of the island but even at its busiest just 20,000 people. With an airport that I would love to fly into sitting on reclaimed land in the middle of the bay/fjord. There is a university. There is even a Thai restaurant.

Night five was in the middle of nowhere – an old school building converted into a very comfortable hotel at Laugarbakki. Ideal stopping point half way between Akureyri and Reykjavik. The local gas station has the most curious, and welcoming, of stores. A treasure trove of homemade souvenirs, knitwear, antiques and old animal bones!

And then onto Reykjavik for two nights.

Reykjavik city is dominated by two buildings – the church, Hallgrímskirkja, and Harpa, the concert hall and convention centre. The concert hall is a fabulous building – accessible and welcoming. And when the weather turns a great place to take shelter.

Good news – not a global high street store anywhere – no Zara or H&M – not even a Starbucks!

There can be few countries that are more photogenic. But do not be too adventurous. Off road driving is illegal to protect the natural environment and fines are high.

Driving is easy; there is not a lot of traffic. At the end of May we had daylight from 3.30am until 11.30pm – so there was plenty of light to drive by – but the weather can change quickly.

Route 1 is just two lanes almost everywhere. It is not fast – best think of it like driving a minor A road in England. Watch out for farm animals, tractors, sharp curves, gravel road surfaces, a few potholes and other distractions!

If you visit in July and August you can take a 4×4 onto the highland roads, letting you visit the most unique and untouched regions of Iceland, that are otherwise closed due to weather or glaciers.

Most of the sites that you want to visit are free and have good parking just off the main road.

You do not need to keep the car in Reykjavik – stay central and walk around. or use the bus services.

Puffin and/or whale watching tours are almost compulsory; but they are not cheap and you may not see much!

The owner of Ban Thai restaurant has lived in Reykjavik for 28 years. His food is authentic Thai. The prices are Icelandic. Ingredients can be a problem. Asked why Iceland his reply was simple. He felt welcome there. The Icelandic people treated him as an equal. They made him welcome. Not like many other European countries who looked down on him as a Thai, he added.

And that is Iceland. Down to earth. Rather conservative. Very proud. Great to visit.

But once is probably enough.