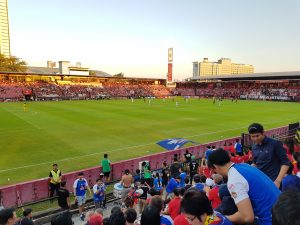 This was billed as the most important game in the history of Chiang Mai FC. The day when we joined the big footballing powers of Thailand – Buriram, Bangkok United, SCG Muangthong and others.

The third game of the new season – in Bangkok next to Impact Arena at the SCG Stadium, home of MuangThong United FC.

But the differences between the clubs are so much more than the scoreline and suggest that Chiang Mai FC remains for now an amateur outfit that needs to rethink how it operates if it wants to be seen as one of Thailand’s stand out football clubs.

Muangthong are four time Thai League Champions – their team is stacked with Thai internationals. They think and act like a professional club.

there are so many problems it is hard to know where to start.

Reality is that it is pathetic. And it would take little effort to fix. But if you start out thinking we are an inferior small town club that will become the reality.

Chiang Mai could be a big Thai club – look at Chiang Rai, Buriram, Chainat – all big clubs from much smaller cities

Muangthong play in a purpose built soccer stadium; fans are seated close to the action. The pitch is in good condition. The ground seats 17,500. They have corporate boxes and matchday hospitality – all ways to add income to the club.

The 700th anniversary stadium in Chiang Mai is a dilapidated bowl.  It was built to host the 1995 Southeast asian Games and to commemorate the 700th Anniversary of Chiang Mai’s establishment at the same time.

Chiang Mai FC returned to the stadium for the 2009 season having used a municipal stadium elsewhere in the city in recent years. The main stand provides covered accommodation for 4,500 spectators. Only the main stand has plastic seats and cover. The rest of the seats are uncovered concrete steps painted white. In theory the capacity is 25,000.

And every seat is a distance from the football pitch due to the athletics track and other facilities.

The ground is shared with JL Chiang Mai so there is no branding dedicated to either club.

Teams announced before the match – in any language – not a chance.

The club hardly makes an effort – and really does not deserve the support that it gets. The support is more for the players and the sport.

As for the game. we competed until the young midfielder Ekanit was taken off injured in the 32nd minute. His replacement, Wongsapat, was invisible. It was still 0-0 at half time but most of the second half was one way traffic – and without anyone to hold the ball – we simply kicked it back to Muangthong and said start again.

Their first goal was a striker’s goal from Terrasil drifting between Evson ( who was in no man’s land) and Thossapol to turn in a cross from Heberty. Heberty made it 2-0 from a VAR awarded penalty. It was no more than Muangthong deserved. A brave performance from goalkeeper Nont kept the score respectable.

Azadzoy does not look the player that he was before last season’s injury. He is slower and less involved than before.

David Bala. Nice haircut. But he does not look like someone who will score goals. Bring back Hiziel Soares.

Eliandro. Big unit. Looks threatening when he runs at pace. But is not a target man to hold up the ball for support.

Pichitphong – lovely chap – new hairstyle. But age is not on his side and that shows in the higher league.

Nont, Thossapol and Evson are going to have a long hard season. I like all three of them. But the team cannot be built around three defenders. Even with five in midfield we were over run on Saturday. 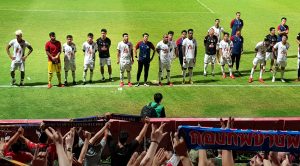 There was great support from the away fans. It is early days but i wonder how many will still be attending if form and results do not improve.