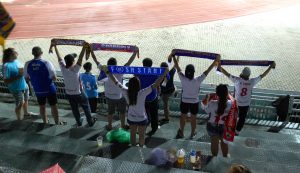 It was hard to imagine how this season could get worse for Chiang Mai FC. Yet it did. Sunday’s dismal performance in a must-win game at Prachuap’s modest Sam Ao stadium was arguably our worst display of the season.

League One survival is mathematically possible; but three of our last four games are against teams currently sitting in 2nd, 3rd and 4th in the league.

It is not that we lost that is annoying; it is that we lost with barely a whimper. Chiang Mai did not have an effort on goal, header or shot, all evening. Other than catching a couple of crosses Kwanchai in the Prachuap goal was a spectator.

Some forty Chiang Mai fans were greeted by driving rain and wind as they took to the open north stand behind the goal; a long way from the pitch in what must be the quietest stadium in Thailand’s League 1.

The rain eased by kick off but a crosswind blew over the pitch for most of the game. The cooler air made for genuinely pleasant conditions. 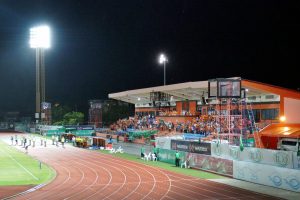 It would have been easy to sleep through the opening minutes; a 13th minute shot from Wanchalerm dribbled past Narit’s left post after 13 minutes. Chiang Mai sat deep with Eliandro looking isolated and the midfield conceding far too much territory to the home team. It was only a matter of time before Prachuap found a way through Chiang Mai’s fragile defence.

Prachuap took the lead with the game’s first on-target shot as Puritat was set up by a pass from Chitpanya and bent his left foot 20 yarder inside Narit’s right post. There were nine defenders between the Prachuap midfielder and goal but he was not closed down. Narit. in goal, may have been unsighted but he failed to make a move to a ball that was at a comfortable height and no distance to his right. He should have done better.

Minutes late the goalkeeper made amends diving to save away to his left after Wanchalerm was set up by Mendy’s pass as he held off Evson down the right side.

Chiang Mai’s first attack of any note was not until the 30th minute when Caique broke down the left and cut into the area where his shot was blocked by Orahovac..

Kwanchai would then flap at an Apisit cross with no one in the six yard area to take advantage.

With half time imminent Eliandro broke down the left and cut the ball inside for Caique who under pressure sliced his shot wide off the outside of his right boot.

But these were rare moments on the break from Chiang Mai who allowed Prachuap to dominate the first half with some 70% of the game played in Chiang Mai’s half of the field.

Any away fans hoping to see a highly motivated Chiang Mai side emerge for the second half were disappointed. The team dribbled out onto the pitch a few at a time looking about as threatening as a kindergarten team coming out to play in a blizzard. This had to be the time to make a statement about a team that was together, motivated and hungry to do well.

Instead it was almost 2-0 within a minute when Maurinho’s cross floated over Narit onto the top of his crossbar.

Five minutes later Maurinho was close to one of the goals of the season – picking the ball up on the right side of the half-way line, driving forward and inside only for his shot from 16 yards to be well saved by Narit diving low to his right and turning a bouncing ball onto the crossbar.

Ten minutes into the second half and a rare visit to the Prachuap penalty box resulted in Evson powerfully heading Atthavit’s free kick – but over the crossbar.

Mendy was increasingly an attacking presence in the second half . 54 minutes gone and he held off Evson to reach a hopeful lobbed pass and shot narrowly wide.

Maurinho also had a chance to increase the lead but with time to pick his target his low shot was again well saved by Narit and Tisud rather hopelessly bit the rebound well over the bar. Tisud may have been offside.

In the 67th minute Prachuap deservedly increased their lead with the simplest of goals. Wanmai (not for the first time) conceded a feekick 35 yards out just right of centre. At the back post Fipilposyan rose above Azadzoy to head across goal where Mendy had ample space and time in front of goal to clinically beat Narit from eight yards Meanwhile Evson, Elinadro and Netipong all looked at each other to see who should have been marking the French forward.

Mendy’s dying swan flop to the floor, as he brushed past Narit in the Chiang Mai area, a few minutes later was Oscar worthy but unnecessary when Prachuap were so much in control of the game.

With a two goal cushion Prachuap relaxed into training game mode. Chiang Mai still looked for an opportunity but failed to trouble the Prachuap defence where Filiposyan and Orahovac were a strong partnership throughout.

Prachuap were good value for their win. Strong in defence and with attacking options up front. If Mendy and Maurinho deliver goals then Prachuap could be surprise League Cup winners on 28 September.

As for Chiang Mai it is not just our ground that needs rebuilding. This was an insipid, uninspired, performance with neither quality nor ambition. Expect many changes in personnel before next season.