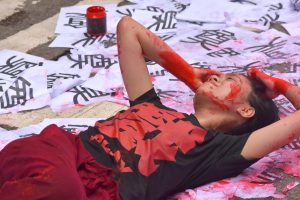 With he imposition of National Security Legislation I fear the sun just set on everything that has made Hong Kong such a special place. A city that I love, where my son was born, and that for so long I was honoured to call home.

Under the law, if any of its provisions are in conflict with Hong Kong’s local laws, then the former will override the latter.

The new law covers four types of crimes, namely secession, subversion, terrorism and collusion with foreign forces. People who are convicted of serious offenses may be sentenced to life imprisonment. Crimes of secession will not necessarily involve the use of violence.

Penalties for companies and other organizations include fines and the suspension or cancellation of their operation licenses. Any profits obtained from committing offenses listed in the law will be confiscated.

People who have been convicted of national security crimes will lose their political right to run for office, including seats on the Legislative Council and the District Council.

Incumbent lawmakers, government officials and civil servants, Executive Council members, judges and judiciary officers, as well as district councilors will lose their seats immediately upon conviction and will not be eligible to take those roles again, although the duration of such a ban is unspecified.

The law also applies to foreigners who have committed a national security offense outside Hong Kong. Additionally, those who are not Hong Kong permanent residents may be deported from the city if they are found guilty.

No bail will be allowed for suspects unless a judge believes with adequate evidence that the suspects will not continue committing acts that harm national security.

Where national secrets or public order concerns are involved, the case will not be heard in public.

Hong Kong’s High Court can hear national security cases without a jury if the Secretary for Justice considers it inappropriate on the basis of protecting national secrets or the safety of jurors and their families, or if foreign factors are present in the case.

The new law provides for three circumstances in which the central government can exert jurisdiction over cases — when there are foreign forces interfering with the case, when the Hong Kong government cannot effectively implement the law, and when China’s national security faces real substantial threats.

An office for the safeguarding of national security will be formed in Hong Kong to supervise and guide Hong Kong authorities. The law allows suspects to enjoy the right to hire a lawyer and the right to a fair trial after they are arrested by the office and after undergoing the office’s first interrogation.

A commission for the safeguarding of national security, consisting of Hong Kong government officials plus an adviser from mainland China, will also be formed. Its decisions cannot be challenged by judicial reviews.

The Hong Kong police force and the Department of Justice will also form new sections on national security under the law.

Finally some notes from the BBC’s Stephen McDonnell on twitter:

So #Beijing’s new National Security Commission can do whatever it likes in #HongKong without “interference from other agencies” and without any judicial review oh and + it can “manage” media organisations and NGOs in the city. #China

Also to “fuel hatred” amongst #HongKong people against the governments in #Beijing or #HongKong via “illegal means” can get you (wait for it) life imprisonment. #China

Trials can be held in secret, without a jury, if deemed necessary on state security grounds and mainland officials can even take over a whole trial and operate it under mainland #China’s rules if this is seen as necessary. #HongKong

#HongKong police to be able to get phone taps and other communications intercept approval directly from CE Carrie Lam. Don’t need approval of a judge. #China

This law also seems to apply to anybody in the world, not only #HongKong citizens, in any country.. if you incite hatred towards the Chinese or HK Governments or the Communist Party you can be found guilty under this security law. Guess you’d have to visit HK to be picked up?”