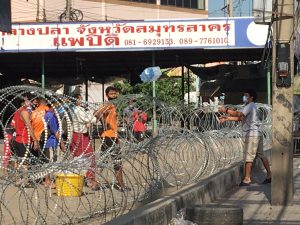 Thailand has started testing tens of thousands of people for coronavirus and extended curbs on movement, a day after locking down Samut Sakhon province following the country’s worst outbreak yet.

The outbreak began at a shrimp market southwest of Bangkok and a centre of the seafood industry that is home to thousands of migrant workers, Reuters reported.

Four cases were reported there on Friday and that number had jumped to 689 by Sunday, the public health ministry said. Thailand had previously kept the epidemic in check, recording little more than 5,000 COVID-19 cases.

He said up to 40,000 people would be tested in Samut Sakhon and nearby provinces, with over 10,000 tests to be conducted by Wednesday.

Migrant workers, mostly from Myanmar, lined up for testing on Sunday, along with some Thais. Most cases identified so far have been asymptomatic, health officials said.

Authorities meanwhile set up razor barb wire at seafood markets and migrant dormitories in Samut Sakhon in order they claimed to contain the movement of workers to prevent the spread of #COVID19. It looks as bad as it is. 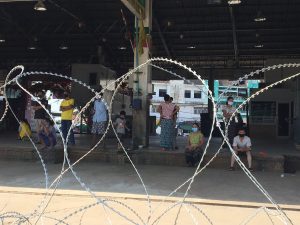 It is worth noting, as was done on twitter, that there are over two million migrant workers in the country who make a huge contribution to the Thai economy, filling jobs many locals are no longer willing to accept. For nearly 30 years authorities have failed to develop a system to regularise their movement and employment. Migrant workers are not to blame for this latest outbreak despite the government’s xenophobic messaging.

The two obvious questions are has this outbreak been contained and what action will the government take?

The Bangkok Metropolitan Administration has already asked for cooperation from state agencies and the private sector to cancel all New Year celebrations and countdown events due to Covid-19 risks. Not so much countdown as lockdown.

The rush to blame foreigners for this outbreak is alarming and potentially disruptive.

BMA spokesman Pongsakorn Kwanmuang said today that city officials will check all 472 fresh markets in Bangkok, looking for migrant workers, to assess the risk of infection. All shoppers must scan the Thai Chana application when entering the markets and all migrant workers must wear face masks. Shouldn’t everyone be wearing face masks.

Deputy Prime Minister Prawit Wongsuwan, in charge of security affairs, has ordered a crackdown on the human trafficking gangs responsible for smuggling people from Myanmar into Thailand, who are being blamed for the second outbreak of infections.

Provincial authorities also have their own powers and in Chiang Mai officials have ordered the lockdown of the following three sub-districts: Mae Ai, Thaton and Malika. This follows a positive case in Ayutthaya. The individual infected had returned home after working in Chiang Mai