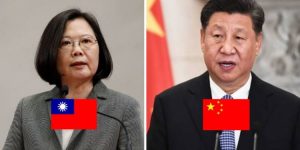 The analysis is spot on – the problem is what if anything the US, EU, and anyone else who cares, can do about it.

China appears all to eager to push the boundaries on what might be an international confrontation. The nation has basically been  able to do whatever they want internally without the west ever caring. Tibet and Xinjiang and their own domestic security.

But there is more cross border sabre rattling now – Hong Kong, Taiwan, India, and the South China Sea all at the same time seems like a bold gambit.

It just is quite the reversal from the foreign relations policies that saw China expand so rapidly in the early 21st century. Putting on an external veneer of progress and inviting foreign investment while still have requirements on Chinese Business ownership was very profitable.

A war over Taiwan is unlikely to be profitable. However, it may be that Xi sees it as a necessity of his legacy.

“China is betting that the West is in irreversible decline
The country’s leaders see their moment, and are seizing it

Its gaze fixed on the prize of becoming rich and strong, China has spent the past 40 years as a risk-averse bully. Quick to inflict pain on smaller powers, it has been more cautious around any country capable of punching back. Recently, however, China’s risk calculations have seemed to change. First Yang Jiechi, the Communist Party’s foreign-policy chief, lectured American diplomats at a bilateral meeting in Alaska, pointing out the failings of American democracy. That earned him hero status back home. Then China imposed sanctions on British, Canadian and European Union politicians, diplomats, academics, lawyers and democracy campaigners. Those sweeping curbs were in retaliation for narrower Western sanctions targeting officials accused of repressing Muslims in the north-western region of Xinjiang.

China’s foreign ministry declares that horrors such as the Atlantic slave trade, colonialism and the Holocaust, as well as the deaths of so many Americans and Europeans from covid-19, should make Western governments ashamed to question China’s record on human rights. Most recently Chinese diplomats and propagandists have denounced as “lies and disinformation” reports that coerced labour is used to pick or process cotton in Xinjiang. They have praised fellow citizens for boycotting foreign brands that decline to use cotton from that region. Still others have sought to prove their zeal by hurling Maoist-era abuse. A Chinese consul-general tweeted that Canada’s prime minister was “a running dog of the US”.

Such performance-nationalism is watched by Western diplomats in Beijing with dismay. Envoys have been summoned for late-night scoldings by Chinese officials, to be informed that this is not the China of 120 years ago when foreign armies and gunboats forced the country’s last, tottering imperial dynasty to open the country wider to outsiders. Some diplomats talk of living through a turning-point in Chinese foreign policy. History buffs debate whether the moment more closely resembles the rise of an angry, revisionist Japan in the 1930s, or that of Germany when steely ambition led it to war in 1914. A veteran diplomat bleakly suggests that China’s rulers view the West as ill-disciplined, weak and venal, and are seeking to bring it to heel, like a dog.

In Washington and other capitals it is not hard to hear voices suggesting that China is making rash, clumsy mistakes. Surely China sees that it is souring public opinion across the West, they murmur. There is puzzlement about how China now views its recent draft accord with the European Union, the Comprehensive Investment Agreement, which it had appeared so eager to conclude. That pact’s ratification by the European Parliament is now on ice, and possibly entombed in permafrost, as a result of China’s sanctions on several Euro-legislators.

In reality Chinese leaders, if their own words and writings are any guide, think that assertiveness is rational. First, they believe that China has numbers on its side as a world order emerges in which developing countries demand, and are accorded, more sway. At the UN most member states reliably support China, as an irreplaceable source of loans, infrastructure and affordable technology, including surveillance kit for nervous autocracies. Second, China is increasingly sure that America is in long-term, irreversible decline, even if other Western countries are too arrogant and racist to accept that “the East is rising, and the West is in decline”, as Chinese leaders put it. China is now applying calculated doses of pain to shock Westerners into realising that the old, American-led order is ending.

China’s rulers are majoritarians. Their hold on power involves convincing most citizens that prosperity, security and national strength require iron-fisted, one-party rule. They unblushingly put the interests of the many over those of the few, whether those individuals are farmers evicted to build a dam, ethnic minorities re-educated to become biddable workers, or dissenters who must be silenced. China is a hard challenge for liberal democrats precisely because its tyranny in the name of the majority is backed by lots of Chinese, albeit at a terrible cost to outliers and minorities. Today, Chinese ideas about global governance sound like a majoritarian world order. Ruan Zongze, a scholar at the foreign ministry’s Xi Jinping Diplomatic Research Centre, explained the official line in a press briefing. He denied that China wanted to export its values. But he outlined a vision of multilateralism-by-majority that—by according no special legitimacy to liberal norms—would be a safe haven for Chinese autocracy. Mr Ruan scorned governments that “use the pretext of democracy to form alliances”. He called that “fake multilateralism”, adding that developing countries need not endure finger-pointing from a West that does not speak for the world. As engines of global growth, China and other emerging economies should have a bigger say, he declared. “Those who represent future trends should be the leading force.”

The majority of the tyrannies

As one European diplomat sees it, at least part of China’s establishment is convinced that the liberal order established after 1945—built around universal human rights, norms and rules that bind the strong and weak alike—is an obstacle to China’s rise. Such revisionists are “convinced that China will not achieve its goals if it plays by the rules”, he says.

Diplomats describe a China that is hubristic and paranoid. They say some Chinese officials are convinced that the EU will soon drop its Xinjiang-related sanctions, because Europe cannot recover from the pandemic without Chinese growth. Other Chinese officials worry that their country is making too many enemies, and tell diplomats as much. Alas, they are outnumbered by those who blame China’s unpopularity on Western resentment of Chinese success. China’s rulers are duly preparing for a protracted struggle. The risks are clear, both for China and the West.”